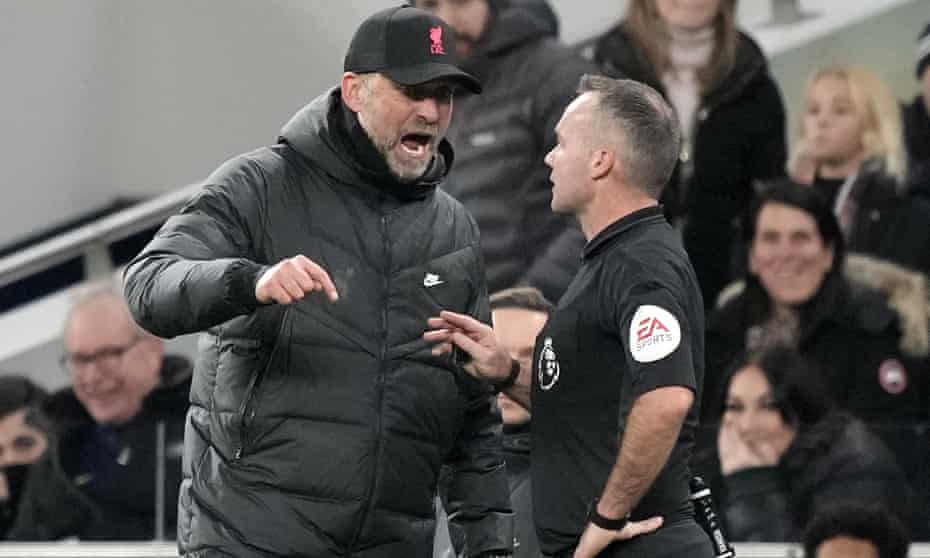 ENGLAND – Jurgen Klopp will face no further action for his post-match comments towards referee Paul Tierney following Liverpool’s 2-2 draw at Tottenham. The Football Association reviewed the Liverpool manager’s comments and will take no further action. The Liverpool manager had been shown a yellow card by referee Tierney in the first half for his reaction to a studs-up challenge from Harry Kane on Andy Robertson. In a pulsating match on Super Sunday, Robertson went on to put Liverpool 2-1 up in the second half, but just three minutes after Heung-Min Son’s equaliser, he saw red for kicking through Emerson Royal.

“I have no problems with referees – only you,” Klopp was overheard saying to Tierney after the game.

The German later told Sky Sports: “There were obviously many other things that were influential in this game, but some of these questions are better to ask Mr Tierney.”

Asked if Kane’s punishment should have been stronger, Klopp said: “Definitely, stronger. We can give Robbo a red card, it’s not the smartest challenge of his life. But that’s definitely a red card, no doubt about it.

“So we have a VAR sitting there, and he has a look again at the Robbo situation. Fine, that’s what he’s there for. What did he do in the Kane situation?”

Former Premier League referee Dermot Gallagher said  Kane was fortunate not to be sent off. “I feel like Kane has got really lucky where the referee has looked at the height of the boot,” said Gallagher.

“Both players are lucky to be honest – Kane’s lucky he’s gone across the ground and catches him on the ankle. Robertson is very lucky because if his leg was planted, he would have a broken leg.