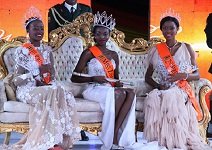 ZIMBABWE – Former Miss Zimbabwe Emily Kachote has taken the Miss Zim Trust, together with the reigning queen Annie Grace Mutambu, to court citing unfair dethronement from the title of Miss World Zimbabwe. Kachote was dethroned after allegations that her nude pictures taken by her former boyfriend only identified as Prosper had gone viral less than two months of her reign as Miss World Zimbabwe.

In her founding affidavit of the case that was heard yesterday at the High Court, Kachote requested for a review of the manner of her dethronement and claimed she was the legitimate reigning Miss Zimbabwe.

She also demanded the prize money amounting to $30 000, a car and other valuables she was promised as the queen.

“This is an application in which I seek the review of the proceedings or manner in which I was deposed or dethroned from the position of Miss Zimbabwe,” she notes in the application.

“I further seek the consequential relief of a declaration to the effect that I am the legitimate reigning Miss Zimbabwe and that Respondent be compelled to allow me to exercise my duties as Miss Zimbabwe,

“I further seek the consequential relief of an order directing the respondent (Miss Zimbabwe Trust) to hand over the prize money in the sum of US$30 000, Kia Picanto motor vehicle among other entitles.”

Kachote also stated that she was not given the chance to say her side of the story before the decision to dethrone her was reached.

In their opposing affidavit, the Miss Zimbabwe Trust Chaperon, Cecilia Jonasi stated that Kachote has misrepresented the nature of her confession regarding the nude pictures.

“The applicant has completely misrepresented to the court the nature of her confession regarding the nude pictures. Applicant claims that she told officials of the first respondent (Miss Zimbabwe Trust) that she suspected one Prosper had taken a nude picture of her without her consent whilst she was sleeping. However, we have a recording where she confessed that after a drunken romp with one Prosper he had taken nude pictures of her and that she had later asked him to delete them,” argues Jonasi.

“The entire premise for her dethronement is premised on these inauspicious events and in consideration of the fact that both parties are narrating different versions of the event there is need for evidence to be produced especially in our case where we have recordings.”

The court referred the matter for trial.

ZIMBABWE - Former Miss Zimbabwe Emily Kachote has taken the Miss Zim Trust, together with the reigning queen Annie Grace Mutambu, to court citing unfair dethronement from the title of Miss World Zimbabwe. Kachote was dethroned after allegations that her nu...
Share via
x
More Information