Keep these cabinet minutes a secret, others we are laughing stock !!! 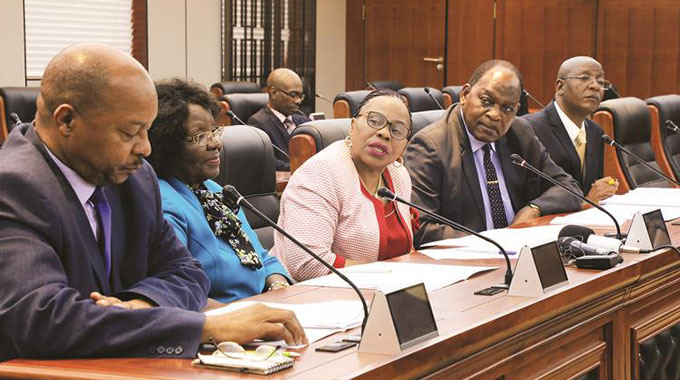 This is not the cabinet’s role. What’s going on gentlemen and ladies? Cabinet’s role is to drive development agenda and policy formulation. What you discussed belongs to a devolution council, local Government Board, and private sector player facility The role of cabinet is simple, to ensure smooth flow of policy formulation.

Honestly , some of these minutes should never be made public. I’m very disappointed after going through measures put in place by the entire cabinet of Zimbabwe, on reducing traffic congestion in Harare. Honestly speaking, we have men and women, highly profiled, seating in the cabinet chambers, to discuss about the issue of working hard on mbudzi roundabout? Is Harare , Mbudzi roundabout? Does purchasing of buses reduce congestion in the entire Zimbabwe? We have a cabinet comprised of learned lawyers, business Community, medical personnel, honestly to sit in a 24 hour cabinet meeting to come up with such hogwash recommendations? Where is our country going? I’m literally disappointed, and I’m sure the President is to retire with honesty legacy, he must relieve the whole cabinet and come up with a proper team.

Here is my two cents advice ;

NB : don’t limit solutions to cabinet chambers only. There are people with solutions , knowledge, understanding out there. Consult others, remove selfishness, at the end after consultation, credit goes to you, because you are the driver of the seat. Learn to consult, citizen’s perspective is critical on such decisions.

We can’t run away from that, it’s a fact, the town is expanding, and our reasoning capacity must expand, we also need expansion of brains in the cabinet. Purchasing of ZUPCO buses is not a solution, unless you tell me, someone is looting through the facility. The money could be channeled to expansion of roads. We can have five spaghetti roads right from five different directions of the entire city, and this will increase advancement of technology, infrastructure Development improvement etc.

We should be sending technical sound people to go to countries like Rwanda, Kenya, South Africa and many other countries, to see how they have done their roads. We also need that kind of urban planning. Instead of limiting decision making to cabinet only, incorporate others to be part of strategic thinking , and this will improve our country.

Government must partner with private sector on these projects. The major challenge is that they are few people who want to benefit in every project, even small projects, like two kilometer road facility networking project. Why can’t you give away these projects to private sector? The challenge is that we have Cabinet Ministers who want to be part of every project released by the Government, and they don’t want any participation from anyone else, other than themselves. We need broader alliance perspective on infrastructure development. Let’s come up with proposals to deal with such a crisis. Open the gates for everyone to participate in economic revival strategy of our country.

Why can’t you take the 100 million United States Dollars, and open at least five roads which leads to the main CBD? Honestly , you tell me that you go into the Munhumutapa boardroom, spend 15 hours to go and discuss about purchasing of ZUPCO buses??? It’s not adding up. We need spaghetti roads around Harare city, and make use of that money to expand the town

Liberalize the economy. Ideas must come from everywhere, don’t limit ideas to yourselves. Citizen’s perspective is critical, for our country’s focused thinking solutions. Allow other players to be part of decision making processes in Zimbabwe.

Formulate devolution councils, and make use of those councils. Incorporate them in key decisions. Actually the cabinet should not be discussing such issues, it is the role of the councils, or establishment of devolution councils which comprise of local Government officials, Harare city council officials, ZINARA, Urban Development planners, engineers etc. The role of cabinet is to push for policy formulation.

When Development partnership, liberalization, public partnerships is there, then funding is not even difficult. There is no need for treasury to be funding this project. For what purpose? This can be done through private sector, and they can even manage their own fund. Why is it that every time, projects like these involve treasury?

Go to our neighbouring country, Zambia and see what they have done in Lusaka. They have opened more than four spaghetti roads around Lusaka city. His Excellency, Edgar Lungu, officially opened the roads, and this was a major boost to their economy. We have nothing to show in Harare, there is serious congestion, most people get home as late as 2200 hrs searching for transport. We only hear on ZTV that Government has purchased over 150 buses, practically on the ground, it can not be proven.

Last but not least, if you go around and make an Impact Assessment on the roads done so far , we have literally become a laughing stock around the world. You look at the roads, you simply conclude that kids were playing with mud to come up with such a road, then the next thing, you open a newspaper, and find out that five million dollars ( USD), was paid for that road construction. Are we really serious with our country? Look at the Christmas pass road, one former Cabinet Minister, was given a tender to do the road, and he used a lot of pit sand, and gravel, the next thing, he was paid over 20 million for that dummy job. Today he is seen with poshy cars, living large, you see?

We are purchasing those buses, in exchange of what? Where is the money coming from? What are we benefitting from the deal? There is no enough disclosure on the nature of these deals. We need disclosure on the nature of the deals. At the end, we will end up mortgaging our country to foreigners. Who is benefitting from what? It’s not yet clear, on the framework of these ZUPCO buses. From my understanding, there are two major companies who are involved in these deals, Sakunda Holdings, and Fossils, and this complicates the whole process of clarity and accountability of Government resources. It further implicates individuals whose names have been tainted on Government funds, ranging from Command Agriculture, and many other shady deals.

Open the economy to everyone !!!

Tinashe Eric Muzamhindo is the Head of Zimbabwe Institute of Strategic Thinking – ZIST, and he can be contacted at countrydirectorzist@gmail.com

Keep these cabinet minutes a secret, others we are laughing stock !!!

By Tinashe Eric Muzamhindo This is not the cabinet's role. What's going on gentlemen and ladies? Cabinet’s role is to drive development agenda and policy formulation. What you discussed belongs to a devolution council, local Government Board, and priva...
Share via
x
More Information