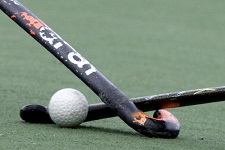 First half goals from Telkom Orange duo Terry Juma and Audrey Omaido gave Kenya the win moving them to the top of the women’s standings with six points.

Veteran defender Juma fired Jos Openda’s charges ahead after only five minutes finishing off a Lilian Aura penalty corner. Omaido fired a field goal past Zimbabwe keeper Jordyn Clipstone for her second goal of the championship at the quarter hour mark.

Zimbabwe were shocked by Kenya’s quick start to the match and were unable to master a comeback as Kenya held on for the win.

The Kenyan ladies had on Friday launched their campaign with a 2-0 over Namibia at the same venue. Forward Omaido told the International Hockey Federation website the team is gunning for their first continental title and a maiden Olympic spot.

“We started well and the two goals gave us an edge and they totally lost focus. We want to keep winning and everyone is playing at their best,” Omaido said.

Openda maintained the same starting squad that beat Namibia and was rewarded by a brilliant start.

Kenya’s next game is against Tanzania on Monday while Zimbabwe face Ghana on the same day.

Kenya’s men’s team begin their campaign this afternoon when they take on Nigeria in their Pool B encounter. The other Pool B encounter will see Egypt, who finished second in 2013 behind winners South Africa, play Tanzania.

It will be the first meeting between the two sides with Kenya ranked 39th in the world looking for a good start against the West African nation who are unranked.

Kenya won bronze during the 2013 edition and will be looking for an improved performance this time as they seek to qualify for their first Olympics since 1988.

Kenya’s coach Meshack Senge has challenged the team to pick all three points so as to enhance their chances of making it to the last four.

“This is our final opportunity to qualify for the Olympics and we are here to give our best, the squad is ready and we are looking forward to take three points,” Senge told Sunday Nation Sport.

At the same time, Kenya Hockey Union (KHU) is on the spot after photos showing the team living in deplorable conditions went viral on social media. Sunday Nation Sport has reliable learnt that KHU opted not to stay at the official tournament hotel and made their own arrangements to stay at Bealiue Hockey Club in Kyalami due to financial constraints. It is however unclear whether the officials are staying at the same hotel with the players.

Efforts to reach the union officials were futile as their phones went unanswered.

A total of 12 officials travelled with the two teams comprising of 36 players.