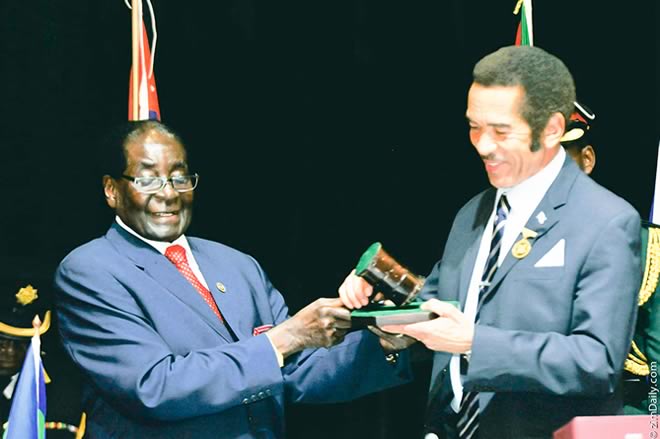 GABORONE – BOTSWANA President Ian Khama, the new chair of the South African Development Community has said the region needs to be a beacon for democracy for Africa, and blasted leaders who cling to power.

At a press briefing after taking over the Sadc leadership Wednesday, Khama slated Burundi’s President Pierre Nkurunziza whose country has been plunged into violence after he ran for a third-term despite strong domestic opposition.“It doesn’t matter how you got there. At the end of the day, once you sit in the office and you assume all the functions and duties of that office, you are serving your term,” he said. “In my opinion, he (Nkurunziza) has served two terms”, Khama, whose country has term limits and who is serving his own second and last, said.Nkurunziza was sworn in at a hastily organised ceremony in Bujumbura on Thursday.

His opponents said he had violated the deal that brought peace a decade ago and limits him to two terms.

His supporters argue that his first term doesn’t count because he was chosen by parliament rather than by popular vote.

Khama took over from Zimbabwe’s Robert Mugabe at the 35th Summit of Sadc heads of state held in Botswana this week.

Mugabe, now in his seventh -term despite Zimbabwe’s economic collapse, is seen as having failed to deal with the epidemic of “third-termism” in Africa and shocked delegates during the last African Union summit in Johannesburg when he suggested there should be no term limits, arguing two terms could feel as short as two weeks.

“It is a democracy, if people want a leader to continue, let him continue,” Mugabe — Zimbabwe’s only leader since independence in 1980 — said.

Khama and Mugabe have had frosty relations as the Botswana leader has consistently spoken out against what he sees as the veteran leader’s autocratic tendencies.

In 2013, Khama condemned the manner in which Zimbabwe’s general elections were held in July that year following allegations of widespread rigging and systematic disenfranchisement.

Khama has a reputation for being brash and outspoken.

He broke ranks with the AU on the International Criminal Court’s outstanding warrant of arrest against Sudanese President Omar al-Bashir.

Mugabe and other leaders fought to prevent al-Bashir’s arrest for alleged crimes against humanity but Botswana publicly condemned African leaders for standing with an oppressor instead of the people.

‘China, yes, but Mugabe is his own enemy’

GABORONE - BOTSWANA President Ian Khama, the new chair of the South African Development Community has said the region needs to be a beacon for democracy for Africa, and blasted leaders who cling to power. At a press briefing after taking over the Sadc lead...
Share via
x
More Information
x