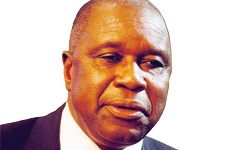 ZIMBABWE – Zanu-PF Mashonaland West provincial executive has passed a vote of no-confidence in War Veterans Minister Chris Mutsvangwa and recommended his expulsion from the revolutionary party.

However, some of those said to have signed the petition have distanced themselves from the action.

Mashonaland West deputy provincial chair Cde Keith Guzah yesterday told journalists in Harare that Cde Mutsvangwa was found guilty of gross misconduct, disloyalty and treachery following his utterances in the media where he was quoted as saying: “We will always respect the institution of marriage and he (Cde Saviour Kasukuwere) is confused and conflating the institution of marriage and that of the State.”

Cde Guzah said Cde Mutsvangwa’s utterances were mischievous and deliberately intended to insult the First Family with the consequence of undermining the authority of the President and bringing the party into disrepute.

“We find Cde Chris Mutsvangwa’s utterances about ‘conflating the institution of marriage and that of the State to be exactly the same in meaning and import as the outrageous ‘bedroom coup’ remarks that got Jabulani Sibanda expelled from the party,” he said.

Cde Guzah refused to divulge the names and number of party members who have signed the petition to pass the vote of no confidence but referred questions to Cde Chengeta whose phone was not reachable.

However, one of the people said to have appended their signatures on the petition Cde Peter Chanetsa distanced himself from it.

He said he was made to believe that the paper he signed for was for senior provincial members who were going to attend the party’s recent conference in Victoria Falls.

Cde Chanetsa said Cde Mutsvangwa was a Presidential appointee and as such could not be suspended by lower structures.
“I did not sign any petition,” he said.

“(Cde) Mutsvangwa is not a member of the Mashonaland West provincial executive. He is a Politburo member and a Minister appointed by the President.

“The problem that we are facing now, is that the party is riddled with crooks. They want to eliminate senior members from the party for self enrichment,” said Cde Chanetsa.

“Cde Chris Mutsvangwa’s shocking and widely publicised utterances should, therefore, attract the same judicial review in terms of the party’s constitution and must suffer the same consequences as did Jabulani Sibanda’s insolent remarks.”

In the Standard newspaper of December 06 2015, Cde Mutsvangwa was quoted as saying: “There is a crying poverty of institutional memory in the commissariat department. That is why the party is resorting to arbitrary votes of no confidence. I am proud of them (war veterans) for reminding the party leadership that decisions made at Congress should be implemented. The war veterans are right. We fought for democracy and people should be seen exercising it.”

For these remarks, Cde Guzah said, Cde Mutsvangwa was offside as his comments were in contrast with the Politburo decision of November 25.

“This is gross indiscipline for a member of our provincial coordinating committee to stand in defiant opposition of a Politburo decision taken in its meeting of 25 November 2015,” he said.

“Its tantamount to challenging the authority of the President and First Secretary of the party, His Excellency Cde R.G Mugabe, who alone is the appointing authority of members of the Politburo in terms of Section 39 of the party’s constitution.”

ZIMBABWE - Zanu-PF Mashonaland West provincial executive has passed a vote of no-confidence in War Veterans Minister Chris Mutsvangwa and recommended his expulsion from the revolutionary party. However, some of those said to have signed the petition have d...
Share via
x
More Information
x