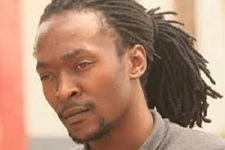 ZIMBABWE – Machira hitmaker King Shaddy found solace in celebrating Christmas by marrying his lover in Highfield on the Boxing Day.

King Shaddy real name Shadreck Kwarire made a surprise visit to his old place of residents accompanied by his relatives in Engineering where he was received with joy by his legion of fans asking for Machira song.

He was not there to entertain but to pay lobola for his long time sweet heart and refused to identify herself according to custom.

The lobola ceremony took place while his fans were waiting outside only to wave their hands as he quickly dashed into his car and sped off soon after being introduced to his in-laws according to custom.

“Yeah what you heard is true, excuse me for some minutes I want to rush somewhere with my aunt and come back for the interview,” said King Shaddy before speeding off the place.

Friends and relatives took turns to congratulate the newly married girl according to custom outside the gate presumably to witness her lover leaving place in peace.