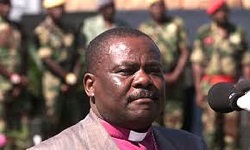 ZIMBABWE – Cleric Dr Nolbert Kunonga and four of his lieutenants must pay $428 000 to the Anglican Church, the value of shares they sold after leaving the Church of the Province of Central Africa to form a splinter church, the High Court has ordered.

Dr Kunonga was Bishop of Harare when he broke away from the Anglican Province and set up his own Province of Zimbabwe with himself as Archbishop.

He retained control until a Supreme Court judgment five years later on the Anglican property in the Harare diocese, including the shares that he then sold.

At the height of the property control dispute, Kunonga and his followers including Beaven Michael Ngundu, Alfred Tome, Justin Nyazika and Winter Shamuyarira, decided to dispose of the church’s property in the form of shares it owned in various companies.
The shares sold are listed as follows:

The sale of shares prejudiced Anglican church members of $427 892. An audit carried out after the Supreme Court decisive judgment in 2012 revealed that the shares had been unlawfully disposed of.

That prompted the Anglican Church’s lawyer, Advocate Thabani Mpofu, instructed by Gill Godlonton and Gerrans, to institute summons against the breakaway group claiming $529 000.

However, Justice Nicholas Mathonsi ordered Dr Kunonga and four others to pay the $427 892 plus interest calculated from September 2007 to the date of payment in full.

“In the result, it is ordered that the judgment be and is hereby entered in favour of the plaintiff as against the first, second, third, fourth and fifth defendants, jointly and severally, the one paying the others to be absolved, in the sum of $427 892,39 together with interest at the prescribed rate from September 30, 2007 to date of payment,” ruled Justice Mathonsi.

Dr Kunonga will also pay costs of the suit.

Justice Mathonsi said since Dr Kunonga and his group broke away from the Anglican Church of the Province of Central Africa in 2007, they ceased to be members of the church and lost right over the church property.

The judge said any sale of assets they did after August 4 2007 was tantamount to selling other people’s property without permission.

“Clearly, therefore, from the time the first defendant and his followers resolved on August 4 2007 to secede from the plaintiff church, they ceased to have any right over the property of the plaintiff they previously controlled or held in trust.

“That property includes the various shares belonging to the plaintiff, which they later disposed of.

“When they sold the shares, they were in fact selling property that did not belong to them,” the judge said.

Justice Mathonsi said although the Kunonga group sold the shares at a giveaway price of $270 000, the church was entitled to the prevailing price at the time of the sale.

“I agree that the value purportedly realised by the defendants, namely $270 000, when they decided to give away the shares at a bargain, does not come into it.

“The plaintiff is entitled to the true value of the shares at the time they were sold.

“The defendants had no business selling them at a bargain. For doing so, they must carry the cross for their lack of diligence,” ruled Justice Mathonsi.

Departing Wharton not turning his back on Zimbabwe

ZIMBABWE - Cleric Dr Nolbert Kunonga and four of his lieutenants must pay $428 000 to the Anglican Church, the value of shares they sold after leaving the Church of the Province of Central Africa to form a splinter church, the High Court has ordered. Dr Ku...
Share via
x
More Information
x