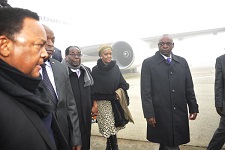 President Mugabe arrived here this morning to attend the 21st Conference of the Parties to the United Nations Framework Convention on Climate Change, COP21 that begins Monday and runs until December 11. The President, who is also African Union chairman, was met at Charles De Gaulle Airport by Ambassador to France Rudo Mabel Chitiga and Embassy staff.

Initially scheduled to land at Le Bourget Airport 8km from Charles de Gaulle, the plane had to divert to the larger Charles de Gaulle due to reduced visibility as Paris was engulfed in thick fog with ground temperatures at 1 degree Celcius.

Jabulani Sibanda: Mugabe is afraid of me

Husband collapsed the marriage after finding his wife is decieving him