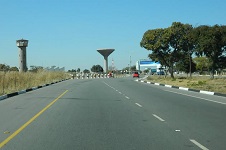 ZIMBABWE – A foreign company with a controlling stake in Augur Investments has approached the High Court seeking an order to protect the interests of shareholders in the firm which is accused of disposing its immovable property and shares to the detriment of the shareholders and creditors.

In its application in the High Court, EDT cited Augur Investments’ 13 nominee companies — which all got land from Harare City Council as payment for the construction of the Joshua Nkomo Express Highway (Harare International Airport Road) about three years ago.

Mr Sharpe and Mr van Blerk are resident in Zimbabwe.

ETD wants the High Court to grant it an interdict to protect the interests of creditors and shareholders, preventing all the 15 respondents from “dealing in immovable properties and shares owned or controlled by them, whether by way of a sale, lease or in any way encumbering these properties”.

According to the court papers, Harare transferred various pieces of land to Augur Investments’ 11 nominee companies for close to $15 million as payment for the construction of the Joshua Mqabuko Nkomo Express Highway as at Sept ember 30, 2012.

In what appears to be a complex scheme of arrangement, all the 11 nominee companies that hold various pieces of land are registered in Zimbabwe.

These 11 Zimbabwean nominee companies are in turn fully owned by 11 companies registered in the Seychelles Islands.

The Seychelles companies are all fully owned by Augur Investments.

Mr Edward Elio Galante, who swore to an affidavit on behalf of Emory Trust, said he was concerned about the way in which Augur Investments group was being managed by Messrs Sharpe and Van Blerk.

“I was led to believe that we had reached agreement on terms of the share sale, however, Mr Sharpe refused to sign the finalised agreement,” said Mr Galante.

“It is now my firm belief that Augur is incapable of completing the Airport Road project. Augur appears to have no funds with which to do so.”

T&C has since approached the same court to recover its dues.

In addition, Mr Galante noted in his papers that the failure by Augur to complete the Airport Road project resulted in the agreement between it and Harare being cancelled.

“The sole purpose for which Augur was incorporated — namely to construct the Airport Road — is, therefore, at an end,” he said.

“Augur is no longer able to perform the construction project as it has insufficient funds and the City of Harare is treating its agreement to be at an end.”

Mr Galante added that the state of affairs at Augur was deplorable due to its directors’ gross mismanagement of the company and breach of their duties.

“Messrs Sharpe and Van Blerk at the very least failed to exercise reasonable skill and care and failed to promote the best interests of the company,” he said.

“Given the gross mismanagement by the directors and Mr Sharpe’s refusal to buy Emory Trust’s shareholding and refusal to disclose the accounts and affairs of the company, the applicants have no option but to litigate.”

The Emory Trust, which is being represented by Gill, Godlonton and Gerrans law firm, is also considering to commence a derivative action against the directors for the mismanagement of the company.

He expressed concern that Mr Sharpe would dissipate the considerable assets the Augur group holds.

“Some of the property has already been encumbered and I fear that this will continue,” he said.

Mr Sharpe, said Mr Galante, was selling portions of unsubdivided stands, which he argues was illegal.

This, he said, further showed that Augur’s assets were being dissipated.

“If the assets of the group were to be dissipated, this would lead to irreparable harm to the applicants, as Emory Trust’s shareholding in Augur as well as the applicants’ claim against Hemisphere and Mr Sharpe could be rendered worthless,” he said.

Mr Sharpe has since filed his opposing papers to the claim which The Herald was yet to obtain.

Lawsuits opens can of worms on airport road

ZIMBABWE - A foreign company with a controlling stake in Augur Investments has approached the High Court seeking an order to protect the interests of shareholders in the firm which is accused of disposing its immovable property and shares to the detriment ...
Share via
x
More Information
x