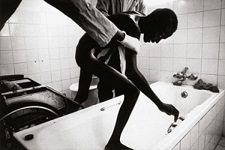 ZIMBABWE – In the small village of Chida, about 200 miles south of Harare, Zimbabwe’s capital, a medical miracle is quietly unfolding. There, a 50-year-old high school teacher named Patrick Mukonto has been living with HIV for more than 15 years. His wife, Mildred, 43, has been living with the disease for eight years.

What’s astonishing is that their three-year-old daughter Nokuthula is HIV free.

The credit goes to a program that Mildred has become an ardent campaigner for — the PMTCTinitiative, or Prevention of Mother to Child Transmission.

From 2011 through September, Zimbabwe’s Ministry of Health has reached nearly 2 million pregnant women with antenatal care and enrolled more than 280,000 HIV-positive pregnant women and more than 234,000 HIV-exposed infants into the nationwide PMTCT.

“We encourage expecting mothers to go for early HIV tests to find out their status and this has been very successful here as more and more expecting mothers testing positive for HIV are turning to PMTCT to save their unborn babies,” Mildred Mukonto told Inter Press Service.

The intervention therapy consists of counseling and Option B+, a lifelong antiretroviral therapy for HIV-positive pregnant and breastfeeding mothers.

“Since Option B+ was introduced in June 2013, there are very few babies who are being born infected with HIV/AIDS here,” said Miriam Shaya, the nurse in charge of one clinic in Chida village.

The PMTCT program has helped avert more than 16,000 new HIV infections in children in 2014 alone, according to Zimbabwe’s Ministry of Health and Child Care.

The program is part of the World Health Organization’s effort to eliminate mother-to-child transfer of HIV worldwide and progress is at different stages indifferent countries.

According to the latest official figures released on Monday the eve of AIDS day, China now has 575,000 people with HIV/AIDS, with six out of every 10,000 people in China possibly infected.The number of people living with HIV/AIDS in China had hit 575,000 by the end of October, with 177,000 deaths, according to the Chinese Center for Disease Control and Prevention.

While China has made substantial progress in tackling HIV, progress in providing PMTCT in Asia and the Pacificin general has been lagging behind the rest of the world, with only 30 percent of infected pregnant women seeking or receiving treatment — this contrasts with an average rate of 67 percent globally and upwards of 95 percent in the Caribbean, Eastern Europe and Central Asia, Latin and North America and Europe.

China has made MTCT a critical concern of the national HIV response and it has resulted in a reduction in HIV-infected newborns from 7.4 percent in 2001 to 6.7 percent in 2013, according to AVERT.

One study in Guangdong province conducted by epidemiologists at Southern Medical University in Guangzhou from 2007 to 2010, called MTCT “the most significant route of HIV infection in children” and acknowledged “that we face a huge challenge of PMTCT in China”.

At the time, without intervention, MTCT was occurring in 25 percent of deliveries among HIV-positive mothers. And without treatment, half of the children born with HIV died before age 2, with very few surviving to school age. Intervention lowered the transmission rate to 13.9 percent province-wide, but it was still above the target rate of 5 percent, which was achieved where the treatment was available.

It’s all about making it available, which is one of the reasons the organizations that fight AIDS are applauding the progress recently announced in Zimbabwe. Charles Lyons, president and CEO of the Elizabeth Glaser Paediatric AIDS Foundation, said Zimbabwe “deserves global attention for such achievements”.

“What Zimbabwe has accomplished in the past five years is an inspiration to the world,” Lyons continued. “We can build upon the incredible momentum we’ve generated here to drive forward towards a future where no child has AIDS.”

ZIMBABWE - In the small village of Chida, about 200 miles south of Harare, Zimbabwe’s capital, a medical miracle is quietly unfolding. There, a 50-year-old high school teacher named Patrick Mukonto has been living with HIV for more than 15 years. His wif...
Share via
x
More Information