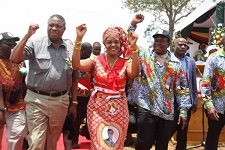 ZIMBABWE – Zimpapers Online brings you LIVE updates from Murehwa in Mashonaland East where First Lady Amai Grace Mugabe is addressing thousands of Zanu-PF supporters in one of her provincial rallies. Yesterday she addressed thousands in Mataga, Midlands Province.

14:36: – Meanwhile Amai Mugabe receives some tokens of appreciation from the people of Mashonaland East.

14:26 – The Sunday Mailwill later today carry detailed reports and analyses of the Mashonaland East rally addressed by First Lady Amai Grace Mugabe. Also subscribe to Zimpapers Newshub for all Zimpapers Digital publications. Those with access to the print in Zimbabwe. do not miss this total package on November 22, 2015. Those with no access, can still enjoy the online version and share the experience as well as enjoy the experience of creating their own content on the platform.

14:24 – CONCLUSION: Amai Mugabe concludes her address and sings the song ‘Jehova Mwari Munogona’ as a special dedication to the people of Mashonaland East.

14:19 – Other donations to the province include 3184 kgs of clothes. Amai Mugabe’s first born son donates 3 tonnes of salt, sugar and bathing tablets and 8124 litres of cooking oil.

14:08- Amai Mugabe congratulates Zanu-PF’s leadership in Mashonaland East province for a record crowd that has attended the rally: “I am happy and as Amai, handina kungouya chete-chete. Pane zvandauya nazvo.”

14:04 -Amai Mugabe warns those who want to ride on their long standing association with President Mugabe saying the majority would not be swayed into mistaking President Mugabe’s track record for these people.

14:00 – Amai Mugabe says Zimbabweans love President Mugabe and they wouldn’t mind having him as a leader even when he is wheelchair-bound.

13:59 – “I am telling you this so that you understand the importance of politic stability.”

13:57 – Amai Mugabe says the same thing happened in Libya and the imperialists wanted to do the same to Zimbabwe, but fortunately Zimbabweans have been behind their leader President Mugabe.

13:55 -INTERNATIONAL RELATIONS:  “You see what happened in Iraq? They said Saddam Husein had weapons of mass destruction. They tried to use the United Nations but they did not get the support. They went ahead to bomb Iraq. They killed Saddam and Iraqis were happy.

“But go there now, people are suffering. They no longer want to see these Americans. And when all this chaos was happening, Americans were busy looting oil” – Amai Mugabe.

13:52 – That having been said, Amai urges locals to play their part and stop causing deforestation. She says trees are very important in sustaining the ecosystem. Amai Mugabe also castigates detractors who are plundering the country’s natural resources.

13:51 – Climate change is largely a result of massive industrialisation by the West. These countries have been emitting harmful gases which destroyed the ozone layer.

13:49- CLIMATE CHANGE: “Climate change is a reality. We are now in November but rains have not fallen. As it is President Mugabe will be attending a conference in Paris (on climate change)” – Amai Mugabe

13:45 – The First Lady castigates business moguls who are importing agricultural produces from neighbouring countries: “That’s corruption and kutidenha isusu anaAmai. Pasi neCorruption. Tichanomira kuBorder and maTrucks iwawo haapinde (It is inappropriate to import agricultural produce when we are trying to promote ZimAsset by generating our own food. We will block those trucks bringing in agricultural produce from outside the country. “

13:43 – Amai Mugabe emphasizes the importance of value addition in any economy saying this helps in the creation of employment.

13:41 – She encourages parents to send children to school so that they get enlightened as well as gain psycho-motor skills.

13:39 – Amai says the Social Services and Poverty Eradication cluster is about construction of schools and clinics so as to improve the lives of the people.

13:38-We are handing over these implements to cooperatives in line with the Food Security and Nutrition cluster but these things are not for free. You have to pay back.”

13:36 – “We are handing over tractors to the people in line with ZimAsset.”

13:28 – Amai Mugabe says after clarifying her working relations with the country’s two vice presidents, papers rushed to write a story that ‘Amai Mugabe confirms Mnangagwa is her boss. Other papers write stories that she has paved the way for Mnangagwa . . .

13:26 – “When they say that, I always say heyo, zvauya zvega.  So, tomorrow you will read a story that ‘Mai Mugabe confirms her presidential ambitions’”

12:24 – Amai says people have been misleading the electorate into believing that she is angling for Vice Presidency and sometimes Presidency.

13:23 – “Those who were appointed were seen fit for those positions. Why fight each other?”

13:17 – First Lady says she has the energy and power of a 120 horse power engine.  Amai says when the land reform started some people thought they could target her to influence President Mugabe to reverse the programme. She calls on people to be satisfied by positions they are appointed to: “I said no ways, I will stand by my man. God gave him to me for a reason. She breaks into a song ‘Tiriparwendo naGushungo. Hapadiwe ndonda pakufamba.’

13: 12 – “Haiwa ah, we are all equal as Zimbabweans regardless of war credentials. Real War Veterans do not behave that way. No.”

13: 11 – She says a few weeks ago she confronted one War Veteran and told him to Stop pursuing factional agendas within the party.

13:10 – Amai Mugabe says people are peddling rumours about her that she doesn’t like War Veterans.

13:09 – “Kaukonde ane nharo. He behaves as if he owns Mashonaland East. No, we cannot allow him to continue doing what he is doing!”

13:03 – Amai Mugabe pleads with parents to ensure that young children are not swayed by members of the People First because they would end up being corrupted.

13:01 – She shares with the people her lived experience of the liberation struggle. She also takes a swipe at former party provincial Chairperson Ray Kaukonde for using his money to exploit vulnerable villagers and children.

Gone with the wind . . .Ray Kaukonde was subsequently fired from the Zanu-PF leadership.

12:59 – She encourages the people of Mashonaland East to teach their children the ideals of the liberation struggle.

12:55 – She adds that Mashonaland East had been invaded by demons but thank GOD, the situation has normalised.

12:52 – Amai Mugabe says Mashonaland East produced a number of heroes. Living and dead: “These people helped us obtain our rights as the owners of the land.” Although Mash East produced heroes, Amai says there has always been sellouts.

12:51 – “I am coming to you as First Lady and also Secretary for Women affairs. As your mother, I am alive to the needs of my children and I am happy to say that this province belongs to just one party. This party is Zanu PF.” – Amai Mugabe.

12:48 – Amai Mugabe starts by thanking the people of Mashonaland East for coming in numbers to meet her.

12:41 – “President Mugabe was in December 2014 given a fresh mandate to lead Zanu PF for the next five years.” – Cde Kasukuwere.

12:35 – Cde Kasukuwere encourages people to stop building castles in the air and dreaming that there is a leadership vacuum in Zanu PF.

12:31 – Cde Kasukuwere says Amai Mugabe  is the powerful woman behind our successful President Mugabe.”She has brought sanity into Zanu PF.”

12:28 – Cde Kasukuwere says: “Amai Mugabe is a rare breed of a principled leader. Vanonzi Mafirakureva. She has nothing to fear and she stands guided by the party constitution.”

12:21- As a province, Cde Matiza says they are united in Zanu PF and there is no room for other disintegrating political formations. Zanu PF National Political Commissar, Cde Saviour Kasukuwere chronicles the journey Amai Mugabe has traveled in pursuit of empowering women and youths in Zimbabwe.

12:18 – He says in Mashonaland East they are guided by the spirit of the liberation struggle.

12:15 – Cde Matiza says as a province Mashonaland East is delighted to play host to Amai Mugabe who is a woman on a mission to visit her children.

12:05 – Amai Mugabe is moving around provinces handing over farming implements to cooperatives.

ZIMBABWE - Zimpapers Online brings you LIVE updates from Murehwa in Mashonaland East where First Lady Amai Grace Mugabe is addressing thousands of Zanu-PF supporters in one of her provincial rallies. Yesterday she addressed thousands in Mataga, Midlands Pr...
Share via
x
More Information