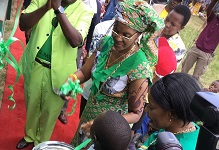 This news gives you updates from Mazowe South in Mashonaland Central where First Lady Dr Amai Grace Mugabe is meeting the people and assessing the impact of the El-Nino induced drought.

Part of the crowd that is still swelling here to meet Dr Amai Grace Mugabe.

11:02 – While waiting for Amai who is in a briefing, some party supporters are dancing to revolutionary songs among them Tambaoga’s Agreement.

11:09 – The briefing is over. Kanyemba Secondary School head in Chiweshe, the venue says they are working on introducing sciences as a way of embracing STEM (Science Technology, Engineering and Mathematics).

11:16 – The school head highlights that one of their biggest challenge is shortage of lab equipment

11:33 – Cde Mahoka says people are going around saying VaMugabe vakura (the President is old) but the truth is that those who are saying so are not young either.

11: 40 – Chimurenga choir is entertaining the crowd dancing to the song Chirera Nherera

11: 43 – Mazowe South leadership is now being introduced. Members of the Women’s League denounce rebellious behaviour and assure the First Lady of their continued support.

11:53 –  Members of Parliament here present are now being introduced by Cde Mabel Chinomona.

12: 21 – Party leadership has finished chanting Zanu-PF slogans each. Cde Kasukuwere is now introducing VP Mphoko and he describes him as a man with a history which is proportional to his height.

12:25 – National Commissar chronicles VP Mphoko’s history from the days of the liberation struggle to date.

12: 29 – Cde Dickson Mafios: “It is my pleasure to welcome you Amai to this province. We are 102% behind our President. It is not in our culture to rebel against party leadership. We treasure you Amai.” Cde Mafios denounces successionists for advancing the agenda of replacing Pres Mugabe.

12:33 – He says President Mugabe is loved by the people of Mashonaland Central as much as he is loved by the people of Africa who gave him standing ovation in Ethiopia recently. Mashonaland Central provincial chairman appeals for assistance in the form of better roads adding that as a province they have granted the First Family freedom of the province.

12:38 – Adv Martin Dinha is now addressing the rally. He apologises for his horse voice adding that it is not because of hangover.  “I don’t drink anymore. There are two things that I have stopped doing. It is drinking and also women,” he says as the crowd roars into laughter. “We are saying one centre of power, one wife.”

12:41 –  Dinha has appeals for food assistance in Mashonaland Central: “In areas like Rushinga, the situation is not good Amai. People do not have anything to eat.”

12:46 – Cde castigates men who are impregnating school going girls and warns them saying they risk jail: “Marrying under age girls has been outlawed. You will be prosecuted.” On that note he winds up his address.

12:50 – A group of war veterans led by Cde Mandi Chimene assures Amai of their support. Cde Chimene castigates some war  veterans who behave as if they were operating with more than one gun during the war.

12:53 – Cde Chimene: “Let me tell you good people. We know what is going on. Do not be misled. Others were misled and they went with Joyce. Others who have been fooled are going too with this one other,” she says without giving names.

12:55 – VP Mphoko takes to the podium now. He says before inviting Dr Amai Mugabe to address the people, he would want to make a few corrections: “Zimbabwe was born out of blood and sweat of the people of Zimbabwe. We fought for this country. President Mugabe and the late VP Joshua Nkomo led the two forces, Zanla and Zipra.”

12:59 – Cde Mphoko: “This country belongs to all of us whether you are Ndebele, Zezuru, Karanga or Sotho. There is talk in the corridors of power that since President Mugabe is Zezuru, after him a Karanga person has to take over. There is nothing like that.”

13:04 – VP Mphoko says those who are power hungry will fall: “In the Bible, Satan had a beautiful voice but he was not satisfied. He wanted to be God. Because of that, he fell by the wayside.” He says people should learn to be satisfied.

13:06 – “Imagine, out of 14 million people here in Zimbabwe, President Mugabe has chosen me. Out of 14 million, but still I am not satisfied. This is what we call being ungrateful.”

13:07 –  VP has now invited Dr Amai Mugabe to make her address and the crowd bursts into song, “Unconquerable.”
Former Min of Information Cde Chen Chimutengwende drives the crowd to frenzy with his Rhumba dance.

13:08 – First Lady thanks VP Mphoko for supporting Women’s League in their endeavor.

13:10 – Dr Amai Mugabe thanks Cde Kasukuwere for doing a great job: “Even if others do not seem to see it, you are doing a great job Cde PC.” Women’s League is the back born of the party, she says.

13: 12 – Dr Amai Mugabe: “I am sure you heard President Mugabe saying so. Those who are not happy with my tours, eat your hearts out. I am here and will do my work. I was tasked by women to do this job.”

13:14 – “We are here today. This is where our late VP Joseph Msika was born. We have been to where VP Nkomo and Muzenda were born.”

13:17 – She says time has come for people to say things as they are. In 2014, First Lady says they were moving around denouncing factionalism and as a result, former VP Dr Joice Mujuru lost her post.

13:18 – Dr Amai Mugabe: “What we did not know was that we had just empowered another faction.” She warns the “other faction” to Stop It! She says she is in Mashonaland Central to stay.

13: 22 – She says it is wrong for people to go around boasting to Zimbabweans about what they did during the  war of liberation: “In this week’s politburo, I told this person to Stop IT.” She has called on journalists to stop being misled.

13:26 – “We went to the politburo and the following day, the paper reported that Amai Mugabe told Jonathan to stop insulting people” Was Jonathan shouting alone? Are we suggesting he is a mad man? Talk about these other people whom he was exchanging words with. We know who is controlling the media.”

WE KNOW WHAT LACOSTE IS

13:30 – “There are people who go around wearing T-shirts inscribed Lacoste, and when you ask them what it means, they tell you its a French brand. We know what it is. We are not foolish. Mugoti unopihwa anyerere.” First Lady has also denounced corruption saying they are aware of people who have 30 per cent stakes in some companies.

13:30 – She is now explaining the economic blueprint, ZimAsset to the people. She also clears air on the misconception that she is gunning for presidency arguing that she is called Amai President already.

13: 35 – Amai Mugabe has called on people to treasure land because other countries do not have that precious resource anymore.

13: 37 – Dr Amai Mugabe has castigated Members of Parliament who are said to be doing nothing in their constituencies

13:42 – Dr Amai Mugabe is back to explaining ZimAsset cluster by cluster.

UPDATE: Due to network problems, we can not give you images at the moment. We will however continue trying to have them for you in order to enjoy a total package.

13:47 – Amai Mugabe has urged people to channel their energy towards the implementation of ZimAsset. She says President Mugabe was chosen by Zimbabweans and not just one person like those who want him out.

13:52 – “He can sit and listen to people telling him lies. The people whom he appointed,” she says as people shout ‘vaguta kuchengetwa’ to which she responds, ‘vagarisa.’

13:59 – She has also warned people against self destructive conduct.

VOTE OF NO CONFIDENCE

14:00 – “People will pass a vote of no confidence on you but when the same was being done to others, you were smiling because you didn’t like them.”

14:01 – Dr Amai Mugabe says people must avoid being loud mouths because they will not like it when people respond.

OF MIDNIGHT VISITS TO SANGOMAS

14:05 – Dr Amai Mugabe says there are people who are having sleepless nights going to traditional healers hoping to topple President Mugabe.

14:06 – “It is wrong. Stop IT.” First Lady also says she is greatful of where she is and is not moved by allegations that she has ulterior motives. She has assured the people of Mashonaland Central that she will continue working for them. “I am here and I brought you something.”

14:12 – Dr Amai Mugabe says as Women’s League they are aware that people were beaten in Midlands and told not to attend the event organised to welcome President Mugabe on Thursday.

NOTICE TO READERS: Please kindly note we experienced a short technical challenge resulting in the site being temporarily offline for a few minutes. Apologies. We are happy to be back!

At 14:23, Dr Amai Grace Mugabe wound up her address as party members took to the dance floor singing, Amai Muri Nhume (Mother You are a Messenger . . .)

That ends this blog.

Discussions however continue – and please enjoy as we exchange ideas.

BACK WITH MORE IMAGES

Here are some images of the scenes at Chiweshe in Mashonaland Central this afternoon, where First lady Dr Amai Grace Mugabe was addressing a rally.

Announcing the decision by war veterans, Cde Mandi Chimene said the suspensions are as a result of “recent utterances, egoistic mismanagement and several other transgressions of the constitution by national chairman Christopher Mutsvangwa.”

This news gives you updates from Mazowe South in Mashonaland Central where First Lady Dr Amai Grace Mugabe is meeting the people and assessing the impact of the El-Nino induced drought. It’s 10:52am and Dr Amai Mugabe is already here. 10:58 – Dr Amai M...
Share via
x
More Information
x