ZIMBABWE – Finance minister Patrick Chinamasa will today present his third budget, where he has little fiscal space due to the depressed economy.Online Reporters

16:39: Chinamasa has finished his budget presentation.

16:29: To exempt tax interest earned from deposits with a tenure of more than 12 months.

16:28: Gold royalty reviewed downwards from 7% to 5% effective from October now 3% on incremental output using the previous year as a base year effective January 2016.

16:24: State procurement Board to review capacity of winning bidder…publicise contract awards and prices.

16:21: CCTV at border points to deal with corrupt practices.

16:07: Infrastructure bond on state schools and universities to be floated.

16:06: $2 million for performance audits in the Auditor General’s office…reform account unit to be established to monitor public entities and analyse financial statements.

16:00 Efforts to mobilise $1,9 billion for railway is still underway.

15:57: Victoria Falls $150 million project will be commissioned and has the capacity to accommodate 1,2 million people per year.

15:54: 20 independent power producers are licensed to date and have been given non financial guarantees.

15:47: 274 hectares of land has been given to tourism for development. Government is set to finalise the Diasdpora policy in 2016 to improve remittances.

15: 42: New indigenization framework to be gazetted before Christmas in a matter that promotes investment.

15: 39: Amendments to Mines Act already approved by government but not yet gazetted.

15:38: Hwange management should address issues to do with the increase of coal production after acquiring machinery.

15:35: Government licensed 12 companies to export chrome ore which is in excess of their smelting capacity.

15:33 Zimbabwe Diamond Mining Company will be the name of the consolidated diamond mines.

15:26: Another 30 million dollars to come to Brazil from agriculture.

15:22: Treasury commits to free cotton inputs for the next three seasons to boost output.

15:18: Government has cleared all arrears to farmers for maize grain deliveries.

15:16: Ministry of Health allocation falls short of the Abuja Declaration.

15:09: Budget deficit as at September was $527 million dollars funded through domestic borrowing which crowds out private sector investment.

15:08 Recurrent expenditure at 93 %, capital expenditure was 6%, this is unsustainable says Chinamasa.

15:07 The bulk of public debt relates to treasury bills and the assumption of the RBZ debt.

14:58: IFIs have accelerated engagement with the private sector.

14:55: The National Budget’s thrust is to consolidate a  platform to unlock fresh capital

14:22: Lawmakers have taken their seats as they await the presenation of the Zimbabwe 2016 Budget.

The #Zim2016Budget comes against a backdrop of;

Zimbabwe currently has a public debt-held by central government – of about 60% of the GDP. this is similar to other countries with fiscal rules. However the reason it is not higher is the challenges the government faces in borrowing. anticipating a time when it is easier for the government to borrow, Zimbabwe should formally adopt a rule to ensure that debt levels do not unnecessarily balloon. similar to African countries that are members of the West African Economic and Monetary Union (WAEMU)and Central African Economic and Monetary Community (CEMAC), the government should consider adopting a debt rule that limits the total stock of public debt for the central government to below 70% of GDP. The current experience under the IMF Staff Monitored Programme (SMP) has revealed that government can sustain this.-Zeparu Economic Barometer
Highlights from the 2015 National Budget

As Zimbabwe’s economy continues to underperform, treasury has made several revisions of key economic indicators in line with the prevailing situation. Below are some of the projections made by finance minister Patrick Chinamasa during the 2015 Mid Term policy. GDP growth rate at 1,5 % from 3,2%. Revenue projection revised to US$3,6 billion from US$3,99bn. Expenditure revised from US$4,1 billion. Budget deficit seen at US$400 million. Agricultural sectors performance for 2014 below expectations owing to poor rains and expected to further decline by 8,2%. NewsDay asked netizens their expectations from the National Budget and these are their responses; 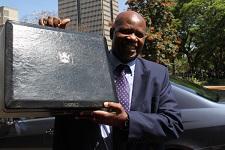