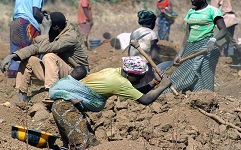 ZIMBABWE – Panners reportedly stormed Chiadzwa diamond fields on Monday evening following Government’s directive for all firms to cease operations since it had taken over control of the concessions.

A ministerial delegation is expected to visit Chiadzwa today to assess the situation.

Workers at the diamond fields, including security personnel, were also ordered to leave, exposing the fields to panners and thieves.

Mining equipment, fuel and household goods were reportedly looted by unknown people on Monday evening with the Diamond Mining Corporation (DMC) making a report to the police yesterday.

Mines and Mining Development Minister Walter Chidhakwa on Monday announced that all diamond mines in Chiadzwa except Marange Resources should stop operations and leave the Zimbabwe Republic Police and officials from his ministry in custody of the concessions.

Marange Resources is wholly-owned by the Government.

Police could neither confirm nor deny moving into the fields, with their spokesperson, Senior Assistant Commissioner Charity Charamba, saying: “The police will comment later after analysing the situation.”

Secretary for Mines and Mining Development Professor Francis Gudyanga confirmed receipt of numerous reports of what transpired in Chiadzwa yesterday.

“There have been all sorts of reports coming from that area. We have our officers on the ground and by midday tomorrow we will have the reports,” he said.

But sources who spoke to The Herald said there had been no proper hand-over-take-over as the decision to take over at the mines was abruptly implemented.

As a result, it was no longer business as usual at the mines.

“The illegal panners are back in full swing and they have started panning,” said a source.

“All the mine security detail were removed from the mine. The police and officials from the ministry are inadequate to secure the fields. Gates into the mines have been broken down which complicates the whole thing.

“The problem is the officials who came in also disconnected CCTV (Closed-circuit television). So it’s difficult to trace who is doing what.”

DMC general manager, Mr Ramsy Malik, yesterday confirmed the looting of their assets adding that they had since filed a report with the police.

“They sent 15 ZRP and ministry officials to secure an area that was guarded by over 120 security personnel at a time,” he said.

“They asked people to pack up and leave at 6pm. Is that humane? They stopped us from removing our equipment from the field to leave it to thieves. This is a mess. Now there is no value for what we built over six years and now it’s being destroyed in a day.

“They should have at least allowed us to plan and work together to take care of our personnel first, secure the equipment and property and then allow proper hand-over-take over. Intimidating and pushing people over is not the solution.”

A report from the mine to management seen by The Herald yesterday indicated that a number of equipment and property was looted on Monday evening.

“Batteries were stolen from the generator at the warehouse,” reads the report.

“Batteries, solar panels and wheels were stolen from the water pumps and mobile lights-units at the mining area.

“Batteries were stolen from the 5 ELB screens and the Sandvik screen, as well as the batteries from the earthmoving machines at the mine.

“All panels of the power screens and mining fleet were opened and parts broken and removed. Damages and loss amounts to an estimate of over $300 000.”

The report added: “Fuel from the screens mentioned above, as well as fuel from all earthmoving machines in the mining area was drained.

“Fuel and the batteries from the generator at the Save River were stolen. Break-in at the Human Resources Office took place, having a desktop computer, printer and odd electrical items stolen.

“Break-in at a residential unit at the executive camp, having a television set stolen. Information was also received that an illegal miner died during an illegal mining activity. Confirmation is not yet received.

“The representatives of the Ministry refused to acknowledge our concern over the deployment and safeguarding of the equipment at the mine and river. They replied that we have no interest in their duties. Estimates in excess of 7 000 litres of fuel were stolen.”

The report added that some of the equipment that had been tempered with would make it difficult to resume operations.

“As we are not allowed to access the plant to continue maintenance, the FeSi in the correct medium sump turns hard as stone, and will cause extreme difficulty to start operations again.

“The water supply to the local community is now also disabled due to the generator at the Save River that is not operational,” the report said.

Other companies said they were still assessing the damage and would respond soon.

Government stopped diamond mining in Chiadzwa on Monday and only Marange Resources was allowed to continue operations after the firms refused to support the establishment of the consolidated firm in the last seven months.

The consolidated company is expected to improve transparency and accountability.

ZIMBABWE - Panners reportedly stormed Chiadzwa diamond fields on Monday evening following Government’s directive for all firms to cease operations since it had taken over control of the concessions. A ministerial delegation is expected to visit Chiadzwa ...
Share via
x
More Information