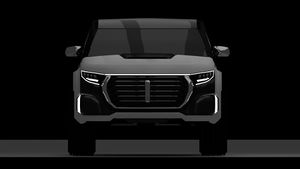 BULAWAYO – A brainchild of Zimbabwean businessman Tatenda Mungofa, the Mureza Prim8 arrived in Zimbabwe for the first time and it is a centre of attraction at the Zimbabwe International Trade Fair. The new “comfortable” car has charmed many such that orders were made at the Mureza grand stand, a sign of hope that the car can penetrate the Zimbabwean market.

Chido Nemhara, who is part of Mureza marketing team, said they were overwhelmed by the feedback from potential clients who visited their stand.

“This is the first time that we exhibit here at ZITF as Mureza Company and we are excited by the comments that we get from our potential clients.

“As Mureza we are all about providing quality and comfortable cars and the Prim8 is all that. Some of the clients made test drives with the car and all the comments we received are satisfactory.

“We also received orders here at ZITF from people who want to own the car. The number of deliveries to be made in the country has now exceeded 100 combined with other clients who made pre-orders way back and they will be delivered soon,” said Nemhara.

As Mureza Auto was first registered in South Africa, Nemhara said they had since registered the company in Zimbabwe and acquired a place where they would assemble the cars.

Establishment of a car manufacturing plant in the country is in line with the National Development Strategy (NDS1) plan of implementing economic growth and stability through empowering young local entrepreneurs who can provide employment to the masses.

The Government has given the nod to Mureza’s efforts and a number of ministers including the Minister of Information, Publicity and Broadcasting Services Monica Mutsvangwa, toured the stand.

“Many people including ministers toured our stand and we are grateful for the support especially from the Government who want to empower and improve the lives of the youth,” said Nemhara.

Mureza Auto was established in 2019 at Automechanika in Johannesburg, South Africa.
The company is a joint venture with Iranian SAIPA Group which is based in Tehran.

It is backed by funders from the United Arab Emirates and other investors.
Mureza cars are assembled from SKD kits in the Automotive Suppliers Park in Rosslyn, Pretoria, South Africa.
The Prim8 model costs US$13 500.

Mureza states the Prim8 is powered by a 1.5-litre four-cylinder petrol engine developing 87kW. However, it seems the correct figure for the 1 503cc M15-powerplant (as indicated for the Quick) is 65kW, with maximum torque of 128Nm at 4 000rpm, driving the front wheels through either a five-speed manual or a CVT.

The Prim8 line-up, consisting of two models, will enter the market in South Africa at a suggested retail price of R196 000 and $13 500 in Zimbabwe. Other models in development include the Prime8-inspired T1 bakkie and the Athlete and Tusker models set to roll out next year.

BULAWAYO - A brainchild of Zimbabwean businessman Tatenda Mungofa, the Mureza Prim8 arrived in Zimbabwe for the first time and it is a centre of attraction at the Zimbabwe International Trade Fair. The new “comfortable” car has charmed many such that o...
Share via
x
More Information
x