ZIMBABWE – Prophetic Healing and Deliverance Ministries led by Prophet Walter Magaya has admitted to unlawfully encroaching into a neighbour’s property popularly known as “Rocks Lodge” next to its Waterfalls chapel in Harare without the consent of the legitimate owners.

The church is now offering to buy the land to avoid eviction from part of Number 8 Prospect in Waterfalls.

The admission was made in a bid to seek an out of court settlement and to avoid eviction from Stand Number 8 Prospect, Waterfalls, where PHD Ministries is carrying out construction work.

A fortnight ago PHD Ministries was sued at the High Court for ‘invading’ and encroaching into the property owned by Panabase Consultancy (Private) Limited at Number 8 Prospect in Harare.

This followed an unsuccessful attempt by PHD Ministries to buy the two-hectare property for $235 000, a price that was turned down by Panabase as too little.

Despite a disagreement on the price, PHD ‘invaded’ the property and allegedly destroyed some structures they had found on the land.

Panabase, through its director and Harare lawyer Mr Shingai Mutumbwa, viewed PHD’s actions as unlawful and a way of arm-twisting the company into selling the property at an unreasonably lower price.

To that end, Panabase filed an urgent chamber application at the High Court seeking the eviction of the church from the land it does not own, Prophet Magaya, employees and their guests from the property.

While the case was pending at court, PHD Ministries’ lawyer Mr Everson Chatambudza engaged Panabase and sought an out of court settlement.

A deed of settlement was filed at the High Court, PHD Ministries admitted to wrongfully encroaching into Panabase’s property.

“The parties hereby agree as follows:

“The first and second respondents (PHD and Prophet Magaya) have encroached onto the Rocks Lodge specifically the hill/rock outcrop at the Caledon Avenue entrance as well as the reed pool immediately below the rock outcrop.”

“The encroachment involves development of a water feature which integrates the rock outcrop and the reed pool.”

PHD said it wanted to buy the property and Panabase agreed to enter negotiations which are expected to be complete within two months.

According to the deed of settlement, PHD will be paying rent to Panabase pending finalisation of the sale negotiations.

On November 2 2011, Panabase acquired a portion of Stand Number 8 of Prospect from the original owners, Crainleigh Park Club.

Panabase indicated in its papers that it carried out some developments including construction of dwelling house, four semi-detached dwelling units, entertainment area, gazebos, borehole ablution blocks and many others.

PHD purchased the other part of the stand that was vacant. 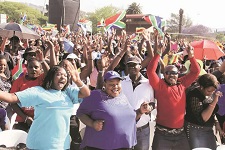 ZIMBABWE - Prophetic Healing and Deliverance Ministries led by Prophet Walter Magaya has admitted to unlawfully encroaching into a neighbour’s property popularly known as “Rocks Lodge” next to its Waterfalls chapel in Harare without the consent of th...
Share via
x
More Information
x