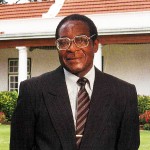 In an exclusive interview with CAJ News in Johannesburg, Magaya said he entertained any member of the public regardless of their political affiliation.

“I speak to everyone who wants to speak to me,” the Prophetic Healing and Deliverance (PHD) ministry founder, said.

Magaya has never hidden his adulation of the Zimbabwean leader.

He has called Mugabe “a fountain of wisdom.”

Last month, he paid US$50 000 for a book chronicling the life of Zimbabwean First Lady, Grace Mugabe, who celebrated her 50th birthday.

Meanwhile, Magaya is optimistic of Zimbabwe’s future prospects and believe the current economic challenge the country is facing is a “passing phase.”

The opposition and the West have blamed Mugabe for the turmoil but the veteran leader argues the West are sabotaging Zimbabwe’s economy after he repossessed land for distribution among the black majority.

“Germany has passed through similar challenges that Zimbabwe is passing through,” he added.

Magaya was in neighbouring South Africa on Tuesday where he was preparing for a massive crusade in the capital – Pretoria.

The Pretoria crusade set to take place between October 2 and 4 is expected to draw throngs of followers.

Previous meetings he held in Botswana is reported to have attracted top government and business officials, traditional leaders, members of the diplomatic community and hundreds of thousands of ordinary citizens.

Magaya, who is said his Sunday service commands 60 000 congregation in Zimbabwe says his calling is to heal the sick and minister salvation.

“My life is centred on ministry that is all I do. I also believe that people who come to our ministry are attracted by the anointing upon the ministry,” he said.

He added that the church at large needed to give direction to political leadership.

“The role of the church is to give focus to those in power,” he added.

Besides ministering the word, Magaya is a successful businessman.

His Planet Africa project is a $10 billion venture company with interests in construction, mining and community development initiatives.

ZIMBABWE - Johannesburg — PROMINENT Zimbabwean clergyman, Prophet Walter Magaya, has defended his closerelationship with President Robert Mugabe. In an exclusive interview with CAJ News in Johannesburg, Magaya said he entertained any member of the public...
Share via
x
More Information