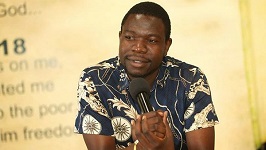 Addressing journalists on Saturday in Pretoria, where he was holding a three-day crusade, Prophet Magaya said he shared President Mugabe’s sentiments over the proliferation of Pentecostal churches.

Mugabe is on record expressing reservations on the upsurge of a new crop of churches, many of which the 91-year-old said were fleecing desperate followers of their hard-earned money.

“He is being a President, that is very good. Even if it were you, you were going to do the same. How would you react if you are in a nation and someone is having ministry and you do not understand where they are and where they are coming from?” said Prophet Magaya while fielding questions.

Prophet Magaya said he would equally do the same if he was in President Mugabe’s shoes.

“That’s a very good thing of a President who is in a nation with strange movements of spirits. He needs to be worried because people may be led astray. So if he criticises. I support him,” said Prophet Magaya.

Turning to his relationship with United Family International Church leader, Prophet Emmanuel Makandiwa, Prophet Magaya said he respected him as someone who had led the way in fellowship work.

He, however, admitted that there was a silent war for battles of souls amongst Pentecostal movements including Prophet Makandiwa whom he said he last met six years ago.

In defence of his acquired wealth in a short space of time, Magaya said he had acquired his wealth through partners dotted across the globe who partnered with his ministry after deliverance.

“We have accumulated our money through our partners across the world who donate out of their own will after they have been prayed for and delivered. People are seeing results and chose to donate,” he said.

He said it was expensive to run a ministry of PHD’s magnitude as it would require partners. Prophet Magaya said he had no intention of establishing churches in areas where he held crusades, saying he only wanted to deliver people.

He scoffed at allegations that he stage-managed miracles bringing people on wheelchairs and crutches saying people were free to attend to his services and test his work.

Commenting on his wife, Tendai, Prophet Magaya said she had been keeping a low profile while learning the ropes.