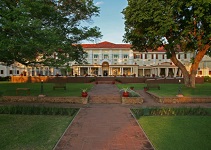 ZIMBABWE – Tourism operators have received a major boost after Government granted a rebate of duty on the import of capital goods for expansion and modernisation as part of deliberate efforts to ensure the growth of the sector.

The rebate will allow tourism operators to import new capital equipment for expansion and modernisation, for renovations of hotels and lodges and for boat equipment among other goods.

This was contained in a Statutory Instrument of a Government Gazette published last Friday by the Finance and Economic Development Minister Patrick Chinamasa in consultation with Tourism and Hospitality Industry Minister Walter Mzembi.

The benefit would not extend to restaurants and cafés located outside hotels and lodges and would only be enjoyed by those operators registered by the Zimbabwe Tourism Authority and Zimbabwe Council of Tourism.

“The Commissioner (General of Taxes) may not grant a rebate of duty to an approved Tourism Operator on the basis of non-compliance with Section 34C of the Revenue Authority Act,” read the regulations.

Clause Four of the S.I provides the procedures for clearance of imported goods.

“Equipment and materials to be entered under the rebate of duty provided for in these regulations shall be entered for consumption at the port of entry nearest to the premises of the tourism operator,” read the notice.

“An operator shall, when effecting entry on importation, or on removal from bond of goods under rebate, submit with the relevant bill of entry a declaration signed by him or her to the effect that the goods are to be used solely in the operator’s business.”

Clause Five provides that the Commissioner might authorise the transfer of rebated goods to another place of business on the same tourism operator.

“Subject to sections (2) and (3) an operator shall not dispose of any rebated goods within five years of the grant of rebate unless (a) written authority of the Commissioner is obtained or (b) payment of the duty rebated in accordance with these regulations has been made,” read Clause 6 (1).

The regulations also authorises the Commissioner to allow the disposal of goods on payment of such duty, not exceeding the amount of duty rebated, as he or she thinks fit, if, in his or her opinion, the goods could not be economically used for the purpose for which they were entered under rebate.

“Duty on rebated goods, which would have been accidentally destroyed before being used in the operator’s business may be remitted if the Commissioner is satisfied that every reasonable effort was made and precaution taken to prevent their destruction,” read Clause 6 (2).

Clause Seven outlines the requirements to be submitted to the Commissioner for eligibility of rebate of duty.

They include a complete specification of each model of boat equipment being imported, a list of refurbishment materials, or boating equipment to be imported for use by the operator in the tourism business, tourism rebate form and a valid tax clearance certificate and proof of registration with Zimbabwe Revenue Authority.

ZIMBABWE - Tourism operators have received a major boost after Government granted a rebate of duty on the import of capital goods for expansion and modernisation as part of deliberate efforts to ensure the growth of the sector. The rebate will allow touris...
Share via
x
More Information
x