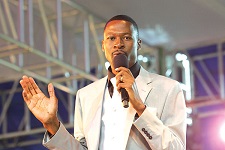 Both the donated groceries — which included cooking oil, sugar beans, matemba, sugar and soap — and the water system were valued at $30 000.

The water system, which consists of a borehole, a submersible pump, a pressure tank, a booster pump and a 500 metre armoured cable, will be used for irrigating the prison’s garden.

The handover of the goods was done by the church’s Agape Family Care (AFC) charity department which was founded by Prophetess Ruth Makandiwa, who is its chairperson.

AFC director Pastor Rufaro Nyadembera said UFIC would continue partnering with Chikurubi Maximum Security Prison, having done so for the past three years.

The church has in the past assisted the prison with food and material for uniforms.

“I have realised that it is easy to talk about love and sing about it, but practising love is a different thing,” said Pastor Nyadembera. “Most people talk about these aspects, but I am glad there are people like Prophetess Ruth Makandiwa who practice them.

This work has been done without donor support nor churches coming together to contribute, but it is a result of the love and selflessness of the couple (Prophet Makandiwa and his wife).”

Pastor Nyadembera had a message of encouragement from Prophetess Makandiwa to the prisoners.

“She said you should not lose hope or be discouraged. Take this time as an opportunity to develop your relationship with your creator and to develop yourself,” he said.

“As Zimbabwe Prisons and Correctional Service management, we appreciate and honour the role played by the Christian world in assisting our organisation in the welfare of inmates,” he said.

“It is our expectation as an organisation for the community to have an influence to their incarcerated relatives and friends.”

Deputy Comm-Gen Machingauta said after realising that the Chikurubi Farm garden was not fully operational, they organised a dinner dance which UFIC responding positively.

A letter to Amai Mujuru and Grace Mugabe