Makandiwa gets nod to build church 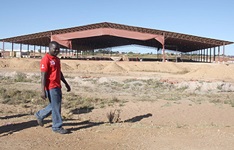 Prophet Makandiwa is building a mega church in Chitungwiza that will change the face of the town on its completion.

Chitungwiza Mayor Councillor Philip Mutoti addressed thousands of UFIC members at their New Year’s eve all-night gathering at the church dubbed “Cross-over Night” where he revealed that the town was going to work with the church for development.

“Prophet Makandiwa is a true Prophet of God. He is the greatest prophet of our time . . . I have never seen such a huge gathering in my life. In fact, us as the Chitungwiza Town Council have decided that we are going to seek the face of God in our work. We have realised we cannot do much without God,” he said, much to the applause of the more than 60 000 congregants who attended the Cross-   over Night.

He told the church members that the town council was grateful to Prophet Makandiwa for choosing Chitungwiza as the site for his state-of-the-art church.

Clr Mutoti, who was accompanied by several councillors, said among the proposed areas of co-operation were refuse collection and rehabitation of roads which were in deplorable state.

In an interview yesterday, Clr Mutoti said Chitungwiza needed a complete overhaul as its council was facing numerous challenges, including failure to provide essential services to its residents.

“We approached renowned UFIC leader, Prophet Makandiwa, petitioning him to partner us since we are facing many challenges as a local authority,” he said.

“Prophet Makandiwa has a huge following and on the night (Cross-over Night), I addressed thousands of his congregants at the church in Chitungwiza close to the town centre.

Clr Mutoti said his council decided to approach Prophet Makandiwa after realising the importance of different stakeholders in Chitungwiza.

“We realised that in Chitungwiza, Prophet Makandiwa is a big land developer and no one can match him in the town after building that large church,” he said.

“Actually, the church has become a tourist attraction in the town and when I addressed them, there were over 120 flags from different countries flying in his church.”

Clr Mutoti said the council invited Prophet Makandiwa to their head office in Chitungwiza yesterday where they deliberated on the issues.

“We invited Prophet Makandiwa today (yesterday) to our council chambers where we asked him to partner us,” he said. “We presented our issues to him and he said he was going to come back to us to map the way forward.”

UFIC spokesperson Pastor Prime Kufakunesu yesterday said they were yet to receive an official statement from the council.

“It is best that you seek the official comment from them (council),” he said. “We have not yet received any official details in regards to what they could have discussed or agreed on.”

Chitungwiza Municipality has been struggling to make ends meet as its workers have gone for more than 26 months without salaries, while service delivery has been neglected.

The roads in the town are in a bad state, while refuse collection seems to have been abandoned, at a time the local authority owes its fired workers more than $4 million in salaries and exit packages.

Makandiwa gets nod to build church