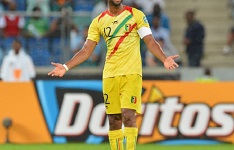 ZIMBABWE – Mali qualified for the African Nations Championship (CHAN) quarterfinals on Saturday thanks to an 82nd-minute goal by Moussa Sissoko against Zimbabwe in their Group D clash in Rubavu, Rwanda.

Sissoko connected home from a Lassana Samake free-kick eight minutes from time to ensure the maximum points for ‘Les Aigles’ while Zimbabwe crashed out after tasting their second successive loss.

The Warriors, semifinalists at the last edition in South Africa two years ago, paid the price for their profligacy in front of goal in a game they were clearly the better side.

Zimbabwe became the first team from the group to learn their fate as far as a place at the next stage is concerned.

The victory served a sweet revenge for the Malians who suffered a 2-1 loss against the Zimbabweans at the quarters two years ago.

Mali started well but it was Zimbabwe who came to the fore minutes later, dominating until the end.

The Southern Africans were unlucky to have ended the first half without a goal as they clearly had the better share of possession and coming close a couple of times.

Striker Rodreck Mutuma’s header bounced off the post from a Hardlife Zvirekwi cross on 27 minutes whilst Ronald Chitiyo shot into the waiting hands of Malian goalie Djigui Diarra after Edmore Chirambadare had done all the work and squared to him.

The second half was no different and Tatenda Mudehwe saw his goal-bound shot after Mutuma back-heeled to him missing target narrowly few minutes after recess.

Mali barely made their present felt in the game but punished their opponents the hard way in the dying minutes as Sissoko tapped home Samake’s free-kick at the edge of the penalty area. Sissoko was named Man-of-the-Match

ZIMBABWE - Mali qualified for the African Nations Championship (CHAN) quarterfinals on Saturday thanks to an 82nd-minute goal by Moussa Sissoko against Zimbabwe in their Group D clash in Rubavu, Rwanda. Sissoko connected home from a Lassana Samake free-kic...
Share via
x
More Information