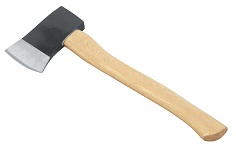 ZIMBABWE – Proud Chimupambwa is alleged to have had a misunderstanding with his two friends, Lloyd Jamawo and Marko Masenda, while at a Shebeen at House Number 3655 in Manyame Park.

Though some linked the dispute to political differences, lose sources to the developments say the trio quarreled over the chickens they had purchased.

“Proud was not happy since the beginning of last week because his two friends Lloyd and Marko ate a chicken which they purchased together.

“So he had been talking of the issue over and over,” said a source adding, “He then asked for an axe from the Shebeen owner saying he wanted to cut firewood for her and he eventually attacked Lodza (Lloyd) and Marko.

“He also told his wife when he was coming here (Shebeen) that musanditsvaga indicating that he had planned it (the alleged killing).”

The alleged murderer was eventually arrested by St Mary’s police soon after the incident occurred.

“When Proud asked for an axe he indeed went to a tree log pretending to be cutting firewood as he promised.

“So Lloyd approached him as a friend and he attacked him once on the head and died on the spot.

“Sensing danger Marko tried to run away but Proud chased him and struck him three times and he also died on the spot.”

When H-Metro arrived at the scene, the deceased bodies were lying on the ground covered with some blankets.

Marko’s (deceased) father could be seen restrained by relatives as he charged towards Proud on why he ‘killed’ his son.

“Ndisiyei ndipedzerane nayo mhondi iyo yauraya mwana wangu (leave me alone and deal with that murderer who killed my son),” he shouted.

Some residents who spoke to this newspaper blasted the Shebeen owner identified Chawira that he should not operate the Shebeen which they say will increase criminal activities.

Motorist knocked down mother and a child

Man went berserk axing to death his two friends in a suspected dispute over chicken.

ZIMBABWE - Proud Chimupambwa is alleged to have had a misunderstanding with his two friends, Lloyd Jamawo and Marko Masenda, while at a Shebeen at House Number 3655 in Manyame Park. Though some linked the dispute to political differences, lose sources to t...
Share via
x
More Information
x