Manchester City illustrate gulf in class with thrashing of Newcastle 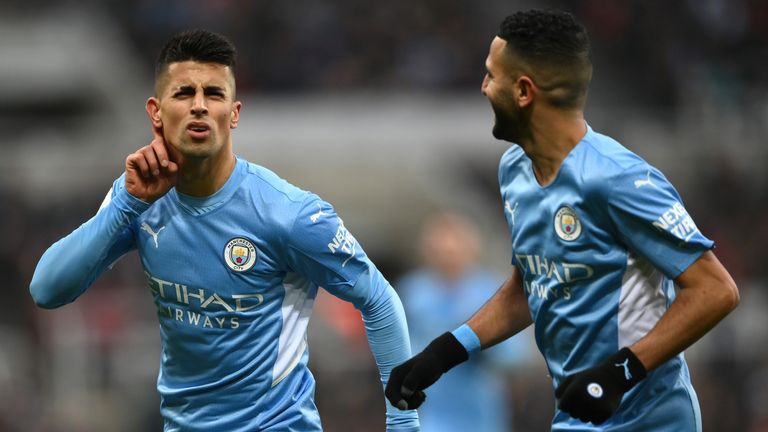 Both clubs may be regarded as “trophy” purchases on the part of their oil-rich overlords but only table-topping City are likely to secure silverware anytime soon. Creditably, Eddie Howe’s side refused to surrender but television viewers in Riyadh and Jeddah may have felt the need to watch through their fingers whenever Pep Guardiola’s players, and the outstanding João Cancelo in particular, assumed possession.

“All that money and you’re going down,” the visiting fans chorused in response to taunts of “We’re richer than you” – and, given that Newcastle have won only one game all season, it is hard to disagree. Despite certain bright spots, most notably Joelinton’s performance in midfield, it took Howe’s team until the 82nd minute to register their first shot on target when Callum Wilson’s fine header stretched Ederson to the limit.

Goodness knows what might have happened had City been at their best, rather than playing within themselves. “The first half was one of the worst we’ve played all season,” Guardiola said. “But the second half was much better.”

The Newcastle supporters who shrugged off Covid-related anxieties to swell the attendance to 52,127 deserved more from their willing but limited and error-prone side on the day St James’ Park was stripped of the unattractive Sports Direct advertising hoardings which blemished the ground during Mike Ashley’s ownership.

Yet if the off-field aesthetics were much improved, on it, little had changed. Certainly not for Howe who has now lost all his 11 Premier League encounters with a City team on a run of eight successive league wins.

The former Bournemouth manager said he had selected a team of “really good athletes” full of “energy and vibrancy”. However his new players’ shortage of streetwise nous was pinpointed as they conceded in the fifth minute after gifting Rúben Dias a free header two yards out.

That moment of almost unprecedented generosity served as a microcosm of long-standing defensive ills. It began with Oleksandr Zinchenko stripping Miguel Almirón of possession and chipping a slightly overhit pass into Cancelo’s path.

No matter; City’s impressively assured right‑back retained sufficient control to hook the ball back across the box. At that point Martin Dubravka could have come for it but, with Ciaran Clark seemingly well placed to clear, he instead remained on his line, watching horror-struck as Clark inexplicably ducked beneath the ball, permitting Dias to apply the final headed touch. Something had clearly been lost in translation between Howe’s goalkeeper and centre-half with the latter primarily culpable.

Already, Cancelo was not merely excelling but reminding everyone he is a total footballer rather than a mere full-back and, emphasising this point, he swiftly doubled City’s advantage.

Appropriately, Cancelo initiated the move, exchanging passes with Riyad Mahrez before assuming possession inside the home half and embarking on a slalom-style advance infield which left Joe Willock on his bottom and Isaac Hayden blindsided before he swept a superb right-foot shot beyond Dubravka from 20 yards.

Newcastle were subsequently rightly aggrieved not to be awarded a blatant penalty after Ederson upended Ryan Fraser in the wake of Cancelo’s defensive interception. However Martin Atkinson’s refereeing could not be blamed for a defeat in which the sight of the immensely improved, apparently reborn, Joelinton – once again Howe’s best player – dropping back into central midfield and channelling his inner Patrick Vieira appeared emblematic of a Newcastle team slowly improving under their latest manager’s tutelage but taking baby steps at a time when a Great Leap Forward is required.

Accordingly even Allan Saint-Maximin’s second-half introduction failed to faze Guardiola’s defence during a 45 minutes in which Dubravka performed wonders to tip Gabriel Jesus’s close‑range header over the bar after Cancelo’s dissection of the black and white backline.https://www.theguardian.com/email/form/plaintone/the-fiverThe Fiver: sign up and get our daily football email.

With Kevin De Bruyne finally making his presence felt in City’s midfield, remote hopes of a Newcastle comeback faded completely when, following a protracted spell of visiting possession, Mahrez connected with Zinchenko’s cross and sent a first-time volley whizzing past the goalkeeper.

Although City’s third goal was initially, erroneously, ruled out for a marginal offside, a VAR review corrected that judgment, leaving travelling fans taunting locals with chants of, “You should have gone shopping.”

By the time Jesus shrugged Jacob Murphy aside and rolled a pass across the box for Raheem Sterling to tap in the fourth, Howe was hunting for positives. “The physical effort from my players was extraordinary,” he said. “The result looks bleak but the game’s reality felt very different. We’re heading in the right direction … but there’s a very long way to go.”

Manchester City illustrate gulf in class with thrashing of Newcastle

ENGLAND - The so-called Gulf derby turned into an ultimately painful exposure of the yawning chasm in class separating the Abu Dhabi-owned Manchester City and the Saudi Arabian-controlled Newcastle United Both clubs may be regarded as “trophy” purchase...
Share via
x
More Information