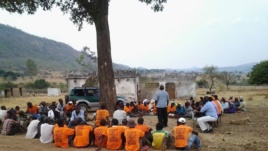 ZIMBABWE – Former Energy Minister and the interim leader of the opposition Renewal Democrats of Zimbabwe, Elton Mangoma, says he must be commended for exposing a scandal at the state-owned Zimbabwe Electricity Supply Authority (ZESA) in which President Robert  Mugabe, cabinet ministers and Members of Parliament were not paying electricity bills at their private properties.

The story was first published by a local newspaper, the Daily News, in 2012. In an exclusive interview with VOA, Mangoma refuted allegations by critics that it was under his watch that senior government officials were not paying electricity bills.

“When I was there, that’s when people knew that ministers were not paying and what people must know is that during that time, government officials and ministers started paying for their electricity.”

Mangoma was a minister under the tenure of the Government of National Unity from 2009 to 2013. The GNU was formally established after the Zimbabwe electorate had delivered a hung parliament following the 2008 disputed election results.

The named defaulters also included legislators from across the political divide in the then ruling coalition, judges, provincial governors and permanent secretaries.

The Zimbabwe Independent newspaper followed this up with another story this year revealing that before the installation of pre-paid meters on their private properties, which they had initially resisted, most ministers, top civil servants and ruling Zanu-PF bigwigs had last paid their electricity bills in 2011.

The bills remained high despite ZESA writing off US$170 million in debts owed by domestic customers, rural farmers and charity organizations in September 2013.

Among the highest debtors was Mr. Mugabe and his wife Grace, who owed ZESA over US$345,000 as at December 31, 2011. ZESA insiders though say the first family was settling its huge bill.

Mr. Mugabe’s family owns Alpha Omega Dairy Farm, which is a subsidiary of the first family’s Gushungo Holdings enterprise and they are also said to be multiple farm owners.

ZESA has embarked on a massive nationwide power disconnection campaign but it is accused of conveniently ignoring government officials.

Efforts to get a comment from Mr. Mugabe spokesman George Charamba and ZESA chief executive officer, Joshua Chifamba, were futile as their phones went unanswered.

Mangoma alleges that the current power cuts are a direct result of the ruling Zanu-PF party’s poor planning.

“Zanu-PF never invested in energy for the last 35 years and any capacity generation increase that we have seen has actually been put in under my watch as minister of energy.”

Mangoma, whose party is holding its congress at the end of this week, has ruled out working with former Vice President Joice Mujuru who was expelled from Zanu-PF alongside many other senior party officials aligned to her.

Mangoma said Mrs. Mujuru and her allies were complicit when Zanu-PF allegedly committed atrocities against the opposition.

He said he was open to talk with other political parties but was quick to emphasis that, “at this stage we have difficulties working with an outfit called People First (fronted by Mujuru). We have ruled out working with them because when people were being killed they were part of Zanu-PF.”

Mangoma was born on 9 November 1955, in Makoni area, Manicaland. His father Solomon Sekesai Mangoma was a nationalist who spent many years under detention at Hwahwa and Gonakudzingwa under the colonial Rhodesian government of Ian Smith.
He joined the opposition Movement for Democratic Change in 2000, starting as deputy chairperson of Makoni North Constituency.

He was elected Member of Parliament for Makoni North in 2008. He was a negotiator leading to the Government of National Unity.

In February 2009, he was appointed first as Minister of Economic Planning and Investment Promotion and then appointed Minister of Energy and Power Development in July 2010.

Mangoma was serving as treasurer-general in the Renewal Team that was formed after a split with Morgan Tsvangirai’s MDC-T before moving out to form the RDZ this year.

Why Mugabe flushed Obama’s speech in the Lavatory

ZIMBABWE - Former Energy Minister and the interim leader of the opposition Renewal Democrats of Zimbabwe, Elton Mangoma, says he must be commended for exposing a scandal at the state-owned Zimbabwe Electricity Supply Authority (ZESA) in which President Ro...
Share via
x
More Information
x