Manyanyeni under fire over nepotism 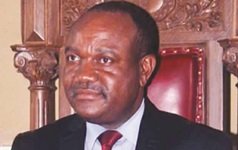 ZIMBABWE – Harare mayor Bernard Manyenyeni has come under fire from a section of councillors who accuse him of nepotism after he allegedly influenced the appointment of his uncle, Mr Justin Mandizha, as the city’s new finance director.

Mr Manyenyeni during his State of the City’s Address on Tuesday heaped praises on Mr Mandizha, raising the ire of councillors who felt that he was pre-emptying the decision of the Human Resources and General Purposes Committee that was still to decide whether Mr Mandizha passed his probation or not.

Mr Mandizha has been on probation since September last year.

Some councillors claim that chances were slim that the finance director would be disciplined for failing to meet his contractual obligations.

In his address Mr Manyenyeni said: “We welcome into the executive team Mr Justin Mandizha in the all-important position of city treasurer or finance director. His fresh sense of professionalism is encouraging,” said Mr Manyenyeni.

Contacted for comment M Manyenyeni said he had nothing to do with Mr Mandizha’s employment at Town House saying he only got to know that he was his relative when he was employed.

“I do not employ people. I can only employ one person that is the town clerk. My great grandfather was a Mandizha I had closer people who wanted the job and were equally qualified,’’ he said.

Mr Manyenyeni said he could praise anyone using the same sentiments.

The city’s Human Resources Committee chairperson councillor Wellington Chikombo, confirmed that Mr Mandizha was still on probation but refused to shed details on Mr Manyenyeni’s alleged nepotism and whether his sentiments would affect the outcome.

“He (Mandizha) is still on probation, we are meeting as the Human Resources and General Purposes Committee to deliberate on the matter,” he said.

It has also emerged that Mr Mandizha was practically running the affairs of the city as a de facto Town Clerk because of the support he received from Mr Manyenyeni whose intentions was to change the city’s executive and replace it with his “people”.

“Mr Mandizha is also playing a critical role in the factional fights in the MDC-T because he controls the purse.

“This has led him to lose focus of improving service delivery, therefore he must be removed with immediate effect,” said a councilor.

At his State of the City Address Mayor Manyenyeni said in the next six months the city would have renewed the face of council leadership by more than 50 percent of the team found in place in 2013.

Manyanyeni under fire over nepotism

ZIMBABWE - Harare mayor Bernard Manyenyeni has come under fire from a section of councillors who accuse him of nepotism after he allegedly influenced the appointment of his uncle, Mr Justin Mandizha, as the city’s new finance director. Mr Manyenyeni duri...
Share via
x
More Information