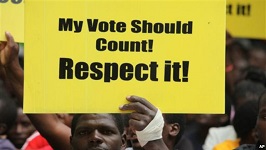 ZIMBABWE – Zimbabwe joined other world nations Thursday in marking Human Rights Day with activists and opposition parties lambasting the government for its continued rights violations and failure to align the countries laws with the new constitution.

Civil society organizations led by the Zimbabwe Lawyers for Human Rights and the Zimbabwe Human Rights NGO Forum were also hunkering down in the capital to assess Harare’s handling of civil liberties with a special focus on the charter.

Top human rights defenders were set to be honored at the event, organizers said.

While Human Rights Watch criticized Zimbabwe for failing to protect children’s rights by not addressing the scourge of child marriages, Amnesty International petitioned President Robert Mugabe to “intervene and set up an independent judge-led commission of inquiry into the disappearance of Itai Dzamara.”

And the Movement for Democratic Change led by Professor Welshman Ncube said, “Zimbabweans have no chance of attaining and enjoying their human rights and freedom from economic bondage as long as they continue to follow corrupt leaders who do more harm than good.”

“On paper we have human rights norms and standards and human rights laws, but in terms of the reality of enjoying them, they remain largely aspirational,” Mavhinga said.