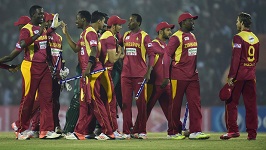 First it was Hamilton Masakadza, who scored a record-breaking 93 to help Zimbabwe post a formidable total. Then came Tendai Chisoro’s three-wicket haul that applied the brakes on Bangladesh’s chase of 181 as the visitors levelled the series at 2-2 with an 18-run win in Khulna.

While Chisoro picked up the key wickets of Sabbir Rahman and Shakib Al Hasan, and Mahmudullah, Neville Madziva, the pacer, did the damage at the start and towards the end as Bangladesh were bowled out for 162 in 19 overs to lose by 18 runs.

Bangladesh’s chase started badly as the top four were blown away with just 17 on the board. Mahmudullah and Imrul Kayes tried to resurrect the innings; Kayes slamming two fours and a six to briefly get the crowd going. But an attempted hoick over deep midwicket brought an end to his innings for a 14-ball 18 in the seventh over.

Mahmudullah, meanwhile, rode luck found boundaries through edges and clips, but he soon got into his zone by hammering sixes over deep midwicket and long-off. Along the way, he was also a recipient of a huge slice of luck when he was dropped by Vusi Sibanda on 13.

Nurul Hasan and Mahmudullah added 57 runs in 6.3 overs as the scales started to tilt again. But Sikander Raza revived Zimbabwe’s hopes as he had Nurul, who was caught at cover. Mashrafe Mortaza, who has shown ability to wield the long handle, struck him for a four and six in the same over to reduce the equation down to 60 off the last six overs.

A hint of panic endured as Elton Chigumbura threw the ball to his frontline spinner Graeme Cremer. Panic turned into proper nerves as he too was tonked for six by Mashrafe. But one slog too many resulted in Mahmudullah’s downfall at the other end as he missed a full ball from Chisoro. Abu Hider Rony swung his way around, but he his effort had to be consigned to being scant consolation for the hosts. He was the last man to fall as Luke Jongwe held on to a low catch at cover to complete the win.

The game started differently for Zimbabwe as they lost an early wicket, but Richmond Mutumbami and Masakadza got them up and running with a brisk 80-run stand. Mutumbami was also reprieved by Taskin Ahmed at short fine leg to add to Bangladesh’s woes.

Masakadza brought out his entire range of strokes, using a combination of brute force and timing to negotiate Bangladesh’s spinners on a slow deck. He too was reprieved on 36 as the hosts suddenly went off the boil. Despite dismissing Mutumbami for a 25-ball 32, Bangladesh didn’t look like getting control as Malcolm Waller blasted his way to an 18-ball 36 to strengthen Zimbabwe’s base.

On the night, the final flourish proved enough as Zimbabwe ran away emphatic winners as they restored parity to head into the World T20 with some confidence restored following a demoralising limited-overs series loss to Afghanistan earlier in the month. The jewel in Zimbabwe’s twin wins to cap off their tour was Masakadza, whose 222 runs is a world record for most runs in aT20 bilateral series.