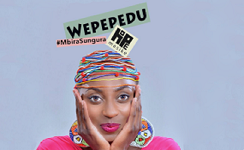 ZIMBABWE – Zimbabwean mbira queen Hope Masike has been nominated for the Best Traditional Female Artist for Africa in the upcoming 2016 Kora All-Africa Music Awards to be held on March 20. The singer will be battling for the gong with other talented artistes including Ethopia’s Abby Lakew, Namibia’s Erna Chimu, Sham Geshu (Eritrea), Cecil Kayirebwa (Rwanda) and Dobet Gnabore from Cote d’Ivore.

Masike becomes the third Zimbabwean to vie for the Kora awards. She joins superstar Oliver Mtukudzi who won the award for his song “Ndakuvara” in 2001 and Jazz crooner Tanga wekwaSando (2005).

“I see this nomination as a national honour rather than a personal privilege.

“Thank you Zimbabwe, thank you to all my fans and may I say to all fellow artists, let’s work even harder this 2016 to spread our musical heritage throughout all nations. Music is one of Zimbabwe’s biggest assets,” she said.

“I am proud to be Zimbabwean at the moment because I have been recognised among great artists just by playing our distinctly mbira instrument which many musicians, at home and abroad, are now playing.

“Through it, we have managed to spread our musical culture to various parts of the world,” she said.

“We never play music for awards but when such recognition comes, it’s a feather in the cap for where we have come from as a nation and to prove that great artists are emerging,” she added.

She has also been interviewed by CNN Newsroom, BBC, SABC’s Morning Live, ZTV’s Good Morning Zimbabwe and on numerous other platforms in Zimbabwe and abroad.

She was a nominee under International Artist for 2013 for the UK-based awards, Zimbabwe Achievers Awards.

She holds a National Certificate in Applied Art and Design, a Diploma in Fine Arts and is currently finishing off her studies in music.

ZIMBABWE - Zimbabwean mbira queen Hope Masike has been nominated for the Best Traditional Female Artist for Africa in the upcoming 2016 Kora All-Africa Music Awards to be held on March 20. The singer will be battling for the gong with other talented artist...
Share via
x
More Information
x