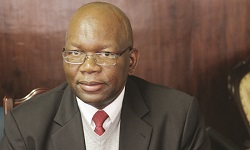 1.7kViews
0 Shares Share on Facebook Share on Twitter
ZIMBABWE – Transport minister Jorum Gumbo has flexed his political muscle and fired CMED (Private) Ltd board chairman Godwills Masimirembwa as part of efforts to clean the mess at the parastatal.

In a letter dated December 18, Gumbo said he had seen it fit to change the leadership of CMED to allow the realisation of his strategic goals of parastatals under his ministry.

“In this regard, this serves to inform you that you have been relieved of your position as the chairman of CMED (Private) Ltd with immediate effect,” Gumbo wrote.

“You are instructed to immediately return all documents, material and property belonging to CMED currently under your possession, and at any rate, not later than 16:00hrs on Monday 21 December 2015(yesterday).”

Although Gumbo was not picking calls yesterday, Masimirembwa confirmed the development.

“Yes, I can confirm that the Hon. Minister (Gumbo) has terminated my contract as the board chairman of CMED (Private Ltd. It is his prerogative to do so. The Hon Minister has indicated that for him to move with his vision, he needs a new leadership at CMED and that is why he has removed me.”

Seymor Mpofu, who was Masimirembwa’s deputy, immediately took over as acting CMED board chair.

“Masimirembwa has been made to pay for trying to frustrate the minister’s plan to have fired CMED managing director Davison Mhaka reinstated,” the source said.

President Robert Mugabe once accused Masimirembwa of demanding a $6 million bribe from an unnamed foreign investor when he was Zimbabwe Mining Development Corporation boss. Mugabe ordered his arrest, but Masimirembwa was later spared.