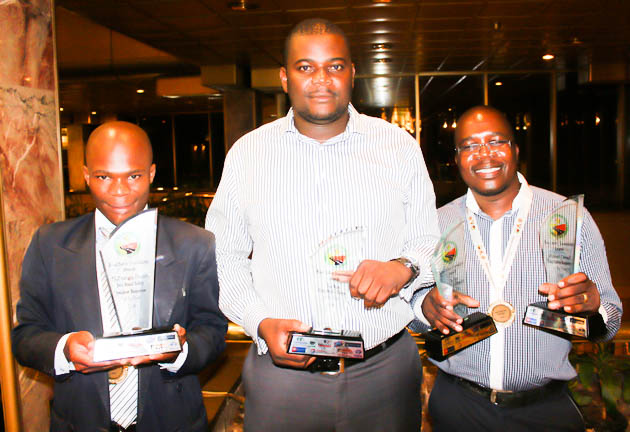 ZIMBABWE – Chronicle Editor Mduduzi Mathuthu who is the proprietor of NewZimbabwe.com, a rabidly anti-ZANU PF website based in England is at the centre of a storm after being accused of playing a tribal card in identifying individuals for retrenchment.

The tribal accusations come against the background of information that all the people except one who were recently given three-month termination of contract notices are Shona while some well-known incompetent Ndebeles were spared.

Among those who were fired are Arnold Muteme (Features Editor), Factmore Nzobo (Features Reporter), Daisy Jeremani (Gender Editor), Never Ndlovu, Letitia Machingura, Jacob Gono and Thomas Madzora. It is also alleged that Mduduzi had also included his deputy Innocent Madonko on the firing-line list but was immediately reinstated after the intervention of Zimpapers chairman Delma Lupepe.

Madonko is said to have been included because Mduduzi views him as a threat given his impeccable record as a competent and genuine journalist who has been with the group since 2001. However, what has raised a lot of furore is the fact that most of those given letters were Shonas. Mathuthu is said to have welcomed the purge as a way of eliminating all perceived adversaries and surround himself with bootlickers and well-known anti-establishment activists.

Mathuthu recently offered a contract to Dingilizwe Ntuli who used to write vitriol articles against the ZANU PF government while at Sunday Times and later at Zimbabwe Independent. He is now The Chronicle’s Sports Editor.

“It is clear that the purge had serious tribal undertones because all the people who fired are Shonas. It is regrettable that the system is giving him a long hand as he is double dipping. He still the proprietor of the Newzimbabwe.com and sometimes we see stories that reflect someone who is inside the system.

People who have been consistently loyal are being purged and one who continues writing negative stories about the system while also getting a salary from it has the power to purge others, it’s sad,” said one fired journalist.

After being appointed Editor in 2012, Mathuthu is said to have confided with his close associates that he wanted to purge all veteran journalists and replace them with more malleable younger people. His chief main targets were all Shona journalists like Muteme and the Managing Editor Waniwa including
Madonko.

However, it seems Waniwa managed to win Mathuthu’s favour and was saved from the chop. Concerns have been raised within the security establishment of the ZANU PF government about the continued stay of all Editors that were hired by former Information Minister Jonathan Moyo. The editors who include Mathuthu,
Caesar Zvayi and Edmund Kudzayi were appointed by Jonathan Moyo as his proxies to spearhead the onslaught on perceived enemies within ZANU PF.

Mathuthu still continues being the proprietor of NewZimbabwe.com and has told some people that he is at The Chronicle to earn a salary and does not believe in any of the revolutionary party’s principles. On the other hand the obese Zvayi is known for being anti-Mugabe during his college and teaching days and constantly referred to Mugabe as a Malawian. Kudzayi who is widely believed to be Baba Jukwa is known for penning and publishing a false story of a gang rape on Bona Mugabe on his Aristocrat website. All the three individuals have never been journalists but good opinion writers. To his credit, Mathuthu at least once worked for the then Daily News as a junior reporter before fleeing for England.

All the three are regarded by the system as security risks that should be plucked from Zimpapers.

ZIMBABWE - Chronicle Editor Mduduzi Mathuthu who is the proprietor of NewZimbabwe.com, a rabidly anti-ZANU PF website based in England is at the centre of a storm after being accused of playing a tribal card in identifying individuals for retrenchment. The...
Share via
x
More Information