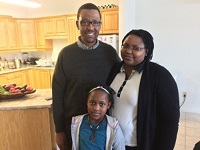 ZIMBABWE – Sitting beside his wife in their apartment on the night of Iqaluit`s election, Kuthula Matshazi typed out two tweets — one in case he won and another if he lost.

The 46-year-old from Zimbabwe kept both, though he only needed the first one.

As results started leaking online, Matshazi phoned up Iqaluit’s returning officer. He was told the official results would be coming out soon, and his name would be on the list.

As far as races go, this wasn’t much of one. Matshazi was one of nine people running for eight seats on Iqaluit’s municipal council, though that didn’t stop him from going door to door and campaigning in the city’s two grocery stores, meeting with members of the community he’s called home for the past three years.

Next Monday, Matshazi will be sworn in along with the new mayor and other members on Iqaluit’s council.

“Iqaluit is my home. I don’t have any other place. I have vested interest here.  My daughter is going to grow here, my family is here so we want to make sure Iqaluit succeeds.”

Matshazi with his wife, Ivony Mtetwa and their 7-year-old daughter Sakhile. The couple also has two sons, one currently attending university in Toronto and another back in Zimbabwe. (John Van Dusen/CBC)

“Winning is actually when he delivers (on his promises) so I think this is half the point where I can say he has won,” said his cousin and campaign manager Beacon Kahumalo.

“There’s a lot of work and he understands that. That’s the position that comes with that.”

Matshazi ran on a platform to improve wellness, housing, food security, infrastructure and waste management, some of the same issues he says that are similar to Zimbabwe.

“Looking at social issues like health indicators, poverty, unemployment, all those things, those are the things that I grew up in,” Matshazi said.

The councillor-elect moved from Zimbabwe to Canada in 2001, living in Ontario. He attended York University and later McMaster University in Hamilton, graduating with a Masters in globalization.

He worked in downtown Toronto 46 floors up on the corner of Bay St. and Adelaide St. before making the move to Iqaluit where he works as a senior policy analyst with the territory’s department of Family Services.

“It’s almost like I was leaving Toronto and going to Bulawayo. Bulawayo is where I was born,” he said.

His wife, Ivony Mtetwa, moved up a year later and remembers having to explain to her family back in Zimbabwe where Nunavut was.

Not only is Matshazi Iqaluit’s first councillor from Zimbabwe, he’s the city’s first black councillor, a sign he says the city is accepting for people from around the world.

“Iqaluit is a cosmopolitan city. When I went out to Halifax, and I talked to one cab driver, he said, ‘oh, you come from Iqaluit, you must be the only black person there.’ Well, you know what, Iqaluit is very diverse. It’s so far away from everywhere else but it’s still very diverse,” he said.

Matshazi says he doesn’t plan to leave any time soon.

“Iqaluit is my home. I don’t have any other place. I have vested interest here. My daughter is going to grow here, my family is here so we want to make sure Iqaluit succeeds.”