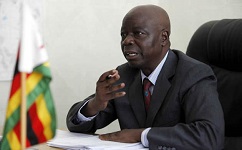 ZIMBABWE – Former Energy and Power Development Minister Dzikamai Mavhaire was yesterday ordered to pay $200 monthly in maintenance for a child born out of wedlock.

This followed a plea by Mavhaire for a downward variation claiming he was no longer able to pay $300 a month after he was sacked from Government.

The court consented to Mavhaire’s plea after he struck an understanding with the mother of the child, Mahkosi Mildred Bere to have the amount reduced.

The consent order tendered before magistrate Mr Trevor Nyatanza read: “By consent of the parties it is hereby ordered that the maintenance order of this court issued on the 30th of November 2013 be and is hereby varied downwards and the applicant is to pay maintenance of $200.00 per month.

“The minor child’s ad hoc requirements such as costs for school trips shall be the Applicant’s responsibility. Each party will bear its costs of suit.”

In his initial submissions, before the out of court settlement agreement, Mavhaire had told the court that the $300 maintenance fee he was paying was determined by his salary and his position as a Cabinet minister.

“I am no longer a Cabinet minister,” he said.

“I have also been relieved of my senatorial position and I have not had a guaranteed income since January 2015.”

Mavhaire said the mother of the child was aware of the changes of his financial position and had agreed to the relief sought.

“By agreement with her since April 2015, I have been paying her maintenance for the child at the rate of $200 monthly,” he said.

He said his application was necessitated by the fact that some of the payments were made in arrears, a clear indication of the financial hardships he is facing.

He was also stripped of his Zanu-PF Politburo post after it was discovered that he was working with a cabal led by expelled former Vice President Dr Joice Mujuru that was angling to topple President Mugabe.

ZIMBABWE - Former Energy and Power Development Minister Dzikamai Mavhaire was yesterday ordered to pay $200 monthly in maintenance for a child born out of wedlock. This followed a plea by Mavhaire for a downward variation claiming he was no longer able to ...
Share via
x
More Information