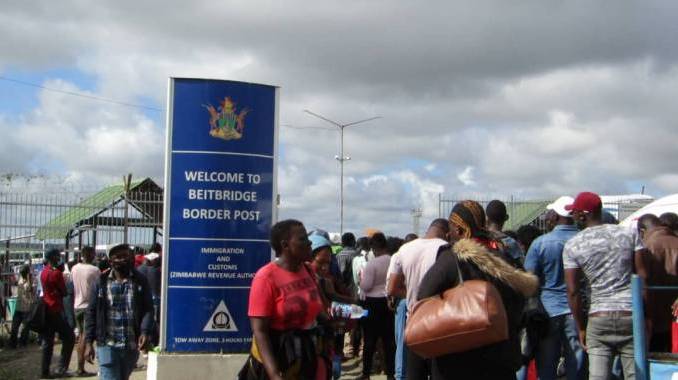 HARARE – The Nelson Chamisa led MDC Alliance said the ongoing crisis at the Beitbridge border post which has seen thousands stuck at the border while others risk their lives trying to migrate to South Africa is a manifestation of the longstanding political and governance crisis in Zimbabwe.

For decades now, the Zimbabweans have flocked to South Africa in a bid to escape the chronic economic meltdown in Zimbabwe which has seen more industries shut down and people lose their jobs.

“The forced migration at Beitbridge border post is a manifestation of a longstanding crisis of governance in Zimbabwe. While people move from country to country throughout the world, the Zimbabwe-South Africa migration is largely driven by Chronic unemployment and increasing poverty in Zimbabwe which is directly connected to the failure of political governance.

“This crisis of governance emanates from flawed electoral processes that have resulted in performance illegitimacy and sheer incompetence by a regime that is pre-occupied with corruption and elite accumulations. Zimbabweans would not have to flood the border as they did returning home for the festive season or returning to South Africa afterwards if the economy was offering them more opportunities,” said Mahere

Mahere added that the continued reality where the traffic between the two countries is one way (Zimbabweans going to South Africa) was a testament to the point that the problem is in Zimbabwe.

The situation at Beitbridge border post has recently been worsened by the Covid-19 pandemic which has slowed down movement due to strict regulations.

However, this as also made the reality of many worse as they fail to legally cross the border while also proving to be a potential hotspot for the spread of the virus as thousands gather for days waiting for their documents to be processed.

Mahere called for immediate intervention while reiterating that there was a need to address the fundamental causes of such problems.

“We implore authorities to take urgent steps to resolve the crisis at the border post. However, as w have stated, to focus only on the situation at Beitbridge would be to merely with a symptom of a bigger problem. That bigger problem is the crisis of governance underwritten by a political process that is contaminated by illegitimacy.

“It is very important to attend to the bigger problem otherwise the situation at Beitbridge will be repeated and it will be worse next time around,” she said.

HARARE - The Nelson Chamisa led MDC Alliance said the ongoing crisis at the Beitbridge border post which has seen thousands stuck at the border while others risk their lives trying to migrate to South Africa is a manifestation of the longstanding political...
Share via
x
More Information