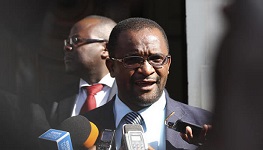 The warning follows a brutal police clampdown on the party’s supporters over the past few days, which has seen its activists and journalists alike being jailed in rural Makoni after the MDC mounted successful demonstrations there.

Speaking at the weekend after a rally that was attended by hundreds of people at Gudyanga Business Centre in Chimanimani, MDC secretary-general Douglas Mwonzora said MDC plans more demos against Mugabe

the recent demonstrations in Chiendambuya and Headlands, as well as the subsequent arrest of his party’s officials, had energised Zimbabweans.

“Demonstrations are going to increase in all parts of the country, and with greater intensity, until government relents,” Mwonzora said as the MDC celebrated the freeing of the jailed activists on bail.

He said his party was “appalled and disgusted” with police’s heavy-handed response to the peaceful demonstrators and would institute legal action against the police officer commanding Makoni district, chief superintendent Garikayi Gwangwava, for allegedly authorising the ruthless suppression of the demonstrations.

“The MDC is appalled and disgusted at the brutal attack by the police on Tekeshe and others. We are definitely going to take legal action against the officer commanding Rusape for having authorised and spearheaded the attack on Tekeshe,” Mwonzora, a lawyer, said.

The heightened protest actions, Mwonzora said, would also be meant to ratchet up pressure on Mugabe’s government to effect needed electoral reforms ahead of the much-awaited 2018 national elections.

Although another demonstration planned for Rusape had been barred by police using the much-criticised Public Order and Security Act, Tsvangirai’s supporters say they will not be cowed by authorities.

“We are not a threat to public peace. There is precedence … we never received complaints in Chiendambuya and Headlands when we demonstrated. Police are just scared of their own shadows”, Trevor Saruwaka, the MDC spokesperson for Makoni district said.

“It’s an open secret that Zanu PF does not seek police clearance for its gatherings, but are supported even in demos that they would not have applied for.

“The police require us to inform them, which we did and will continue to do, but that does not give them the right to deny us our constitutionally-enshrined right to do so.

“What we see are actions of a paranoid government which is afraid of its own people and Constitution,” Saruwaka added, noting the partisanship of the police.