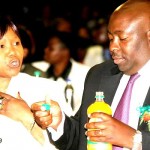 HARARE – LOCAL Government minister Saviour Kasukuwere says he is ready for a fight with MDC-T leader Morgan Tsvangirai, warning that the former premier should brace for the “biggest embarrassment of his life”.

Kasukuwere’s threats follow Tsvangirai’s declaration that he would take him head-on over his decision to interfere in the running of the affairs of the opposition-led Harare City Council.

Kasukuwere yesterday said he would not be threatened by Tsvangirai, saying his responsibility was to protect residents from abuse of funds by council officials.

“I am the superintendent of local authorities. I cannot just fold my arms while the MDC-T councillors plunder people’s hard-earned rates,” Kasukuwere said.

“Residents are paying money and his [Tsvangirai] councillors are refusing to own up and allow for audits.” Kasukuwere last month suspended Harare mayor Bernard Manyenyeni on allegations of illegally appointing James Mushore as town clerk. He then appointed Chris Mbanga as acting mayor.

Tsvangirai, however, said Kasukuwere’s actions were unconstitutional and threatened to take the matter to the courts. The MDC-T leader also vowed to continue supporting Manyenyeni.

But Kasukuwere said: “MDC-T councillors are running down councils. Look at potholes around the city. In fact, even schools development councils are run in a better way than councils. Schools are affording to buy buses yet the MDC-T led councils cannot even afford to buy a kombi.”

On allegations that he was interfering in the work of councils that should be run independently, the Zanu PF political commissar said: “There is no republic inside another republic. Councils are run under the Urban Councils Act. How can he say we as government have no business discussing what local authorities do?”

“Legislators at council level are not equal to Parliament. They are governed by the Act of Parliament,” he said.

Kasukuwere added: “Tsvangirai cannot call for sanctions and then cause chaos in cities and hope us to ignore.”

Last year, Kasukuwere suspended all the 18 Gweru councillors, including the mayor Hamutendi Kombayi and his deputy Artwel Matyorauta on allegations of gross misconduct and mismanagement of council funds and affairs. Source – The Zimbabwe Standard