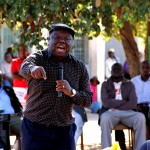 This followed a warning by MDC’s secretary general Douglas Mwonzora last week that Mugabe and his ruling Zanu-PF party should brace for more mass demonstrations until democracy and respect for human rights were restored in the country.

Mwonzora’s remarks, according to a Daily News report, came a few weeks after a brutal police clampdown on MDC supporters saw activists and journalists being jailed in rural Makoni.

“Demonstrations are going to increase in all parts of the country, and with greater intensity, until government relents,” Mwonzora was quoted as saying.

According to News Day, hundreds of MDC youths marched to parliament in capital Harare on Tuesday.

They carried placards that read among others: “We do not want dark cities”,”We need quality affordable education” and “Bring back Itai Dzamara now”.

Journalist-turned-activist Itai Dzamara was abducted from a barber’s shop in March and has not been seen since. He had been holding a one-man protest against Mugabe’s rule in central Harare’s Africa Unity Square. Mugabe’s government has been blamed over his disappearance.

The MDC said Tuesday’s demonstration marked the beginning of a series of weekly protests meant to pressure Mugabe’s government to implementing electoral and security sector reforms, and take the country out of its economic crisis, the report said.

“This is the beginning of bigger demos to come. The police and security should not treat us with heavy-handedness because we are hungry and angry,” MDC Harare provincial youth secretary Denford Ngadziore was quoted as saying.

Zimbabwe has been reeling under economic hardships for more than a decade after sanctions were imposed in 2002, following rising political violence ahead of that year’s presidential elections.

The ruling Zanu-PF party vowed during its election campaign in 2013 it would create at least 2.2 million jobs, but the country has over the past two years seen thousands losing their jobs due to the continued deterioration of the economy.

Can Mujuru cause an upset in Zimbabwe politics?

MDC protests against Mugabe in Harare