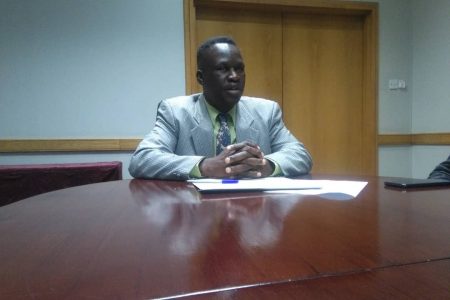 Mwonzora is accused of withdrawing $300 000 without approval from the party.

Chisvo was addressing the media on Tuesday in Harare where he accused the leadership of covering up the abuse of funds happening within the party and exhibiting biases against certain members of the party.

“We have no kind words to the MDC – T leadership which seems to cover up for the acts of indiscipline and gross abuse of funds. The MDC – T national organiser, Abedinico Bhebhe was suspended and then later expelled from the party for indiscipline, while the party deputy spokesperson Hon Khalipani Pugheni was suspended from his position last month on allegations of his own personal issues that could threaten the integrity of the party.

“In this scenario, we expect the immediate course of action against Douglas Mwonzora. There must be no selective application of the rules of the party.” he said

Chisvo expressed concern at the failure by acting President Thokozani Khupe to act decisively on the matter amid reports that Mwonzora had apologised for his actions. He said through her failure to act on the issue, Khupe had become an accomplice.

He said: “As a concerned party member, I want to register the public opinion that the failure by the MDC-T leadership and in particular the Acting President Hon Dr Thokozani Khupe to act decisively on the $300 000 stolen by Mwonzora is a sign that that they are an accomplice.

“The allegations that Mwonzora apologized to the Standing Committee Members and forgiven by acting party President Dr Khupe is not constitutional and they have no mandate to cover up corruption, fraud and criminal offence in the party.”

Chisvo has already reported Mwonzora to the police.