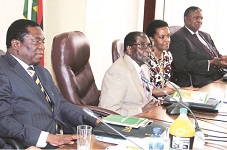 ZIMBABWE – President Robert Mugabe’s government is deliberately holding back on creating awareness of the constitution among Zimbabweans, for “fear of an enlightened citizenry”, the opposition MDC-T has said.

In a statement Monday, the party’s spokesperson Obert Gutu said three years following the adoption of the national charter, no effort had been made to translate the constitution into all official languages as is required by the Supreme law of the land.

“The MDC has noted, with extreme disappointment, that the Zanu PF government is deliberately avoiding taking the relevant steps that will enable all citizens of the country to familiarise themselves with the contents of the Constitution,” said Gutu.

“We suspect that the Zanu PF regime harbours a very sinister motive of trying to make sure that the majority of the citizens are not made aware of their constitutional rights as detailed in their country’s Constitution.

“This is not at all surprising because all dictatorial regimes the world over are very fearful of a population that is highly conscientised about its fundamental rights and liberties.”

He added: “Put alternatively, all dictatorial regimes, such as the Zanu PF regime, thrive and subsist on the ignorance and suppression of the majority of the people.

“Little wonder, therefore, that the majority of Zimbabweans, both within the country and in the Diaspora, are not at all aware of the contents of their own national Constitution. This is, indeed, a huge embarrassment to us as an independent and sovereign nation.

“It is very difficult to inculcate the spirit of patriotism, oneness and nationhood within our people if the majority of Zimbabweans remain ignorant of the provisions of their own Constitution,” the MDC-T information chief said.

“The MDC sincerely hopes and trusts that the new curriculum that is being talked about by the ministry of Education would prioritise the teaching of our Constitution from the early childhood learning stage going up”.

Gutu said government had, instead, spent millions on top-of-the-range vehicles for ministers indicating its “warped priorities”.

The preamble to the Constitution of Zimbabwe states in part, “It is, therefore, incumbent on all stakeholders, particularly the government, to ensure that all Zimbabweans are fully acquainted with the terms and conditions of the Constitution that became operational in May, 2013”.

ZIMBABWE - President Robert Mugabe's government is deliberately holding back on creating awareness of the constitution among Zimbabweans, for 'fear of an enlightened citizenry', the opposition MDC-T has said. In a statement Monday, the party's spokespe...
Share via
x
More Information