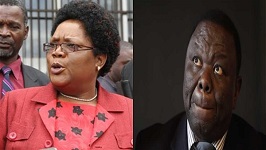 ZIMBABWE – The Herald and other state media have been on a systematic programme of distorting MDCT President Morgan Tsvangirai’s statements, including their reporting today on his visit to Bulawayo.

The Herald also deliberately reported about former MDC members who left the party to join Tendai Biti’s attempted coup in 2014 who have now jumped ship again to Dr Mujuru’s PF as if they had just recently jumped from the MDC-T to PF.

MDC-T Secretary, Douglas Mwonzora, took time to set the record straight in this article in which he also set out the main opposition’s priorities as Zimbabwe prepares for another election, even though President Robert Mugabe’s ZANU (PF) seems determined not to carry out the reforms that Zimbabwe has already commuted to in its own constitution and under SADC and UN charters.

The latest attempt by the state is the attempt to play off the People First against the MDC. In the preceding few weeks the state media has run false stories about MDC members purportedly leaving the MDC to join the People First. In this regard they have portrayed the People First as a party bent on poaching supporters not from Zanu PF but from the opposition.

Although they were clearly no longer MDC, the state press has misrepresented that they joined the People First straight from the MDC. The fact that some of these people were the founding fathers of the PDP was conveniently ignored.

At the same time in the latest issues of the Herald, and other state media, the state apparatus have sought to portray President Tsvangirai as hostile and condescending towards the People First. The Herald has shamelessly misrepresented President Tsvangirai as saying that MDC won’t work with People First because it is led by a woman and does not have structures. This way they hoped to portray the President as chauvinistic, selfish and anti-unity.

Second the President clarified on whether or not the MDC and the People First had formed a coalition. He said that coalitions take place between political parties and he mused that he found it odd for some people to suggest the existence of a coalition between an existing political party and a party that has not yet been formed. Officials from the People First have been on record advising that they will launch their political party latter this year. That has not yet happened.

The president reiterated the MDC’s time honoured principle that it will work with other progressive political parties and forces to remove the dictatorship in Zimbabwe. In this regard the MDC will collaborate with other political parties and organisations including the People First. The MDC is not an opponent of other opposition political organisations, the President said, but an opponent of Zanu PF. While the MDC wants to remove Zanu PF from power, it has no desire to remove the People First from anywhere. Therefore there is no antagonism between the MDC and other opposition parties and organisations in Zimbabwe.

From the beginning of this year President Tsvangirai has embarked on two strategic programs. The first is the program of addressing the Provincial Assemblies of the MDC outlining the Party’s vision and program of action for 2016. The second is a practical program of an assessment of the state of the party structurally countrywide. On the latter program, the President together with other senior leaders toured district clusters assessing the structural strength of the Party in each district.

In outlining the vision of the Party as well as laying the 2016 program of action the President has laid eight Cardinals.

The First Cardinal is that the members and leaders of the MDC must have faith and belief in their ability to win the democratic struggle. In this regard, they must remember that it is not impossible to defeat Zanu PF. Just as they defeated Zanu PF and Mugabe on the 29th of March 2008, the MDC family can annihilate Mugabe and Zanu PF again.

The Second Cardinal relates to nation building. Our goal must not simply be the electoral defeat of Zanu PF. It must be the rebuilding of a democratic and prosperous Zimbabwe. This entails jettisoning the nationalist agenda and adopting policies that will lead to the building of a modern social, political and economic order. Modern economies can never be built on the bedrock of archaic nationalistic rhetoric.

The Third Cardinal relates to party building. For efficacy of change, the MDC strengthen itself as a change agent. Party building involves growing the number of party supporters through recruitment and attracting hitherto undecided voters. It also involves making sure that the party structures at all levels are complete and intact. However party building involves a complete paradigm shift to make sure that the party does not do the very same things as in the past and expect different results. It also involves the ideological reorientation of the party and the growing and nurturing of the conscientious cadre.

The Sixth Cardinal is the ward based campaign. The ratio of taking the ward as the basic unit is the realisation that we need to mobilise around the people who are bearing the brunt of the dictatorship’s ruinous economic policies and practices.

The Seventh Cardinal is action. Mass action has to be embarked upon to press for key political reforms. The President emphasised that all the action that we are going to embark on will be peaceful and will be predicated upon the respect of the bodily integrity of every Zimbabwean. After all, the aim of the MDC is to take power through peaceful, democratic and constitutional means.

The President did not suggest that the list of the Cardinals that he laid was exhaustive. However what this outline shows is that the MDC has started seriously to prepare for the next elections. It would have been beneficial for the Zimbabwean people had the reportage on President Tsvangirai’s trips not been corrupted by some in the press who have been victims of the vile practice of falsifying history.

ZIMBABWE - The Herald and other state media have been on a systematic programme of distorting MDCT President Morgan Tsvangirai’s statements, including their reporting today on his visit to Bulawayo. The Herald also deliberately reported about former MDC ...
Share via
x
More Information
x