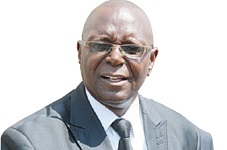 “This is a resolution but as you know, we’re a democratic party, the relevant constitutional provisions will be followed. In the MDC-T there’s nothing like a summary dismissal so there are provisions that are followed after the resolution,” he said.

Sources said yesterday that Hlalo had been given 30 days to appeal against the decision to an independent tribunal set up by the party for that purpose.

As the fallout deepens between Tsvangirai and Chamisa, accused of campaigning for an early congress to depose the embattled leader, more purges are expected in the party especially in Bulawayo.

Insiders said the party will announce more expulsions next week as Tsvangirai and the Khupe faction, sources said, gang up against Chamisa’s grouping.

Hlalo, engaged in a legal wrangle with Bulawayo deputy Mayor Gift Banda, a reported Khupe ally for the provincial chairperson’s post, was accused by the party of bringing its name into disrepute and failing to adhere to a directive to abandon his court action.

Hlalo had approached the courts seeking to nullify Banda’s election at the party’s chaotic provincial congress in October last year in the run up to its main congress following the departure of former secretary general, Tendai Biti, and 20 other members of parliament to form the MDC-Renewal and later People’s Democratic Party.

The party reportedly also snubbed an application by the MDC-T Veteran Activists Association (VAA) to be the party’s affiliate member and have Tsvangirai as their patron as the Khupe faction reportedly convinced the former Prime Minister that it was composed mostly of “Cobra” elements, a term associated with Chamisa’s grouping.

The group was also reportedly blamed for causing chaos at the late Nkulumane legislator Thamsanqa Mahlangu’s burial when party youths engaged in violent clashes as the two factions battled to control funeral and burial processes.

The youths clashed again last Friday when Tsvangirai, who had snubbed Mahlangu’s burial, visited the late legislator’s relatives in Bulawayo.

Gutu also confirmed that the party turned down VAA’s application to be an affiliate member and have Tsvangirai as their patron.

“These are all calculated moves by the Khupe faction and Tsvangirai to weaken the Chamisa grouping. They targeted Hlalo, an ally of Chamisa knowing how influential he is in Bulawayo province,” said an insider.

“Tsvangirai is panicking and showing that he is being dictatorial. He ignored the arbiter general’s report that fingered Khupe and organising secretary Abednico Bhebhe as the ones behind the chaos in Bulawayo.

“The arbiter general was sent by the party to investigate problems affecting the province and interviewed at least 300 members.

“The party sources said Tsvangirai was in panic mode after his wife, Elizabeth Macheka, last Friday threatened to take it upon herself to solve the problems in Bulawayo.

“Probably to avoid what would have been an inevitable face-off between Khupe and his wife Tsvangirai bowed to pressure by the deputy president’s faction to sack Hlalo.

“Macheka, who had accompanied Tsvangirai to Bulawayo last Friday, complained after the violent clashes between the youths saying the problem was that the president tended to be misled by interested parties as he didn’t listen to the ordinary party members,” said the source.

Grace’s donations should be explained

Mugabe’s Cabinet: An act of arrogance