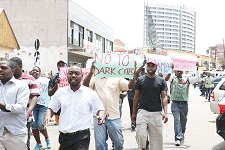 ZIMBABWE – Hundreds of MDC-T youths in Harare yesterday defied heavy police presence in the city centre and held a peaceful demonstration, where they gave President Robert Mugabe an ultimatum to either leave office or kill them for demanding an end to Zanu PF misrule.

Bring back Itai Dzamara now! read one of the screaming placards carried by the opposition youths, as they marched to Parliament, where they were addressed by their national youth leader, Happymore Chidziva.

Other banners read: We do not want dark cities and We need quality affordable education.

“It’s either you kill us or you leave office,”Chidziva declared, in obvious reference to Mugabe’s failure to address the country’s worsening socio-economic crisis.

“Police officers initially wanted to block us, but we told them that this war was also for their benefit since they were also living in the dark and have unemployed relatives. We don’t want dark cities anymore and we want Itai Dzamara brought back.

“We went into the streets also to express our fury at the treatment vendors are getting.”

MDC-T Harare provincial youth secretary Denford Ngadziore said yesterday’s demonstration marked the beginning of a series of weekly protests lined up by the party to pressure the Zanu PF government to implementing electoral and security sector reforms and take the country out of its economic crisis.

“This is the beginning of bigger demos to come. The police and security should not treat us with heavy-handedness because we are hungry and angry,” he warned.

Last week, MDC-T spokesperson Obert Gutu announced that the party would roll out a number of demonstrations until its demands have been addressed.

The MDC-T, which accuses Mugabe of rigging elections, has for the past two years been threatening demonstrations against the President, but nothing had materialised so far.

Dzamara led a picket line before he was allegedly abducted.

ZIMBABWE - Hundreds of MDC-T youths in Harare yesterday defied heavy police presence in the city centre and held a peaceful demonstration, where they gave President Robert Mugabe an ultimatum to either leave office or kill them for demanding an end to Zanu...
Share via
x
More Information