Members only it’s a private party 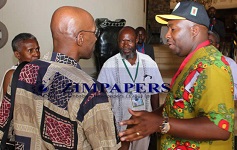 ZIMBABWE – Suspended Zanu-PF officials and infiltrators will not be allowed to attend the 15th Zanu-PF Annual National People’s Conference which will be officially opened by President Mugabe here today, national commissar Cde Saviour Kasukuwere has said.

In an interview yesterday, Cde Kasukuwere said the party would not hesitate to expel or suspend undisciplined cadres causing confusion in the party.

This comes after the Zanu-PF Central Committee on Wednesday expelled three former officials, suspended two others for five years, while another quartet was suspended for five years.

These join hordes of other officials expelled and suspended from the party this year after it was discovered that they were working with a cabal led by Mrs Mujuru, which was angling to topple President Mugabe.

Cde Kasukuwere said because of indiscipline, the suspended members would be watching the event from the terraces as they were not tolerated anywhere near the venue.

In any case, he said, there would be tight security to deal with any gate crashers.

Mr Musona and Cde Tsenengamu are some of the suspended Zanu-PF members who arrived in Victoria Falls yesterday with the intention to attend the conference.

“Delegates who are coming from the provinces must be bona fide delegates,” said Cde Kasukuwere. “Security will be tight from tomorrow morning and we will not allow those not accredited, MDC or People First infiltrators.

“We can’t allow imposters who are coming on a fishing expedition. What matters is to be disciplined because we know that even if we expel you, you still do not want to miss Zanu-PF events. Because of indiscipline, they will now be watching from hotels nearby. We must respect decisions of the party.

“You build the party on discipline and if you give instructions and commands they will be followed.”

Cde Kasukuwere said the party would continue weeding out errant members bent on creating disunity as a way of ensuring that discipline prevails.

“You are aware that this year we started dealing with those comrades who were expelled and some who were suspended and they accepted their fate,” he said. “We must have discipline in the party for the growth and sake of the organisation. We must ensure there is discipline. The party will not keep quiet, the party will not sit back and allow indiscipline to prevail.”

Cde Kasukuwere added: “We have made it clear that if you dabble in factional politics and if you become a destabilising force in the party because of pursuing factionalist agenda, we will deal with you and that is the reason why some have been suspended while others have been expelled.”

Cde Kasukuwere warned members who habour ambitions that destabilise the party to keep them to themselves, as the party would not hesitate to take action.

He said in terms of the economy, the Zanu-PF Government was making headway to fulfill most of the election promises made to the people during the 2013 harmonised elections.

“The political machinery is moving and if it moves like a juggernaut you cannot stop it,” he said. “The people’s belief in the leadership of President Mugabe and the party has grown tremendously and we want to ensure the objectives of the party to deliver better services to the people.

“We are taking stock, looking at challenges and failures in the past year and rejuvenate the troops as they go back to various areas to brief the people on what is being done and where we are going. We are on an upward trend and the ability to organise such a conference speaks volumes.”

Cde Kasukuwere said the conference came at a time the party’s Look East Policy has been vindicated following the recent visit by Chinese President Mr Xi Jinping, who together with President Mugabe witnessed the signing of 15 landmark economic deals worth about $4 billion dollars.

He said the completion of the airport road in Harare and the Victoria Falls International Airport were evidence of the growth and development taking place in the country.

On the yet to be fulfilled 2013 electoral pledges, Cde Kasukuwere said job creation was not a one day event, but a process.

“The issues that I have talked about in terms of the construction of roads and the Victoria Falls airport, our people’s role in the participation of agriculture, the funding, the revival of Cottco, the revival of Cold Storage Commission and GMB is also getting on its feet. We need to ensure that irrigation becomes an anchor of turning the fortunes of our economy.”

Cde Kasukuwere said the party had increased its support bases as evidenced by the expansions from 2 900 to 3 000 districts across the country.

Members only it's a private party