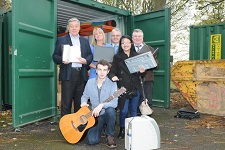 ZIMBABWE – A ‘classroom in a container’ sent to a Zimbabwe school by South Tyneside College has completed its 5,500 mile journey.

The eight ­tonne steel crate arrived at the Youth Contact Centre (YCC) school in the city of Bulawayo, packed with donated books, computers, furniture, musical instruments, and other teaching essentials.

After a 38 day journey, travelling via Hamburg, Portugal, the Canary Islands, Cape Town and Durban the gifts finally arrived in Bulawayo by train.

The steel container will also remain at YCC where it will be converted into a permanent recording studio to support students’ musical ambitions.

Named Salibonani Bulawayo – which translates as ‘Hello Bulawayo’ – the inititive was organised by South Tyneside College governor Les Watson, 64, who worked at the YCC in the 1980s.

Mr Watson, was dismayed at the state of the school on a visit last year, so started seeking donations to help it regain its former glory.

He said: “The photos of the container arriving and the smiles on the faces of the pupils and staff show just how much it means to them to have these new and excellent resources.

“We are all delighted that the container has arrived and its contents are already being put to good use.

“To know that schoolbooks and other items sent from this region are making a real difference to children seeking good education in Zimbabwe is tremendous.”

Edson Mazarire, chairmen of YCC’s board in Bulawayo, said: “We had a wonderful time unloading the container and there was a lot of excitement with the students, teachers and the board members. I felt very humbled with the whole occasion.

“Thank you very much to all who put in the effort to get the container here and those who donated the very helpful materials we have received.

“They will go a long way to improving the educational standards and learning environment of a future generation.”

Dr Lindsey Whiterod OBE, Chief Executive of South Tyneside College, said: “It is wonderful to know that the items sent from the North East are being used by the pupils.

“It has been a hugely rewarding project for everyone involved and shows just what can be achieved when people set out to do something good and positive.”

ZIMBABWE - A ‘classroom in a container’ sent to a Zimbabwe school by South Tyneside College has completed its 5,500 mile journey. The eight ­tonne steel crate arrived at the Youth Contact Centre (YCC) school in the city of Bulawayo, packed with donate...
Share via
x
More Information
x