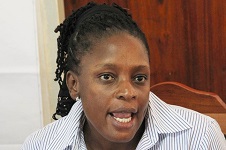 ZIMBABWE – MDC legislator for Matabeleland South Mrs Priscilla Misihairabwi-Mushonga caused a scene in the National Assembly yesterday when she brought an infant into the House when it was in session.

Mrs Misihairabwi-Mushonga recently caused a stir in Parliament when she brought samples of sanitary wear to illustrate her point
This time around, she said her unprecedented action was meant to make Parliament appreciate the need to put mechanisms in place to cater for nursing mothers.

According to Parliamentary Standing Rules and Orders, MPs are not allowed to bring into the chamber a person who is not an MP.

Only parliamentary administration staff on duty and journalists are allowed into the chamber when it’s in session.

When Mrs Misihairabwi-Mushonga walked into the House holding the baby, other legislators and ministers were visibly surprised.

She had a quick chat with National Assembly Speaker Advocate Jacob Mudenda, who gave her the floor to explain her actions.

“Most of these women you are beginning to see in this House are child bearing and there is nothing here in this Parliament that allows you to bring your baby, be looked after and breastfeed,” she said drawing applause from fellow women and rumblings from male legislators.

“In our Standing Rules and Orders, we do not have anything that allows anybody to take time out. Our Constitution wants to make sure that both men and women have equal opportunities to participate in political activities . . .

“But I understand Mr Speaker, because I looked at the Standing Rules and Orders and there is no provision that allows somebody to bring in a baby . . .

“I am hoping Mr Speaker that after I have made this and I have agreed with you that I am going to take the baby out, it’s going to be a point about ensuring that both our Standing Rules and Orders and everything else facilitates for women to participate effectively in issues of political work.”

Adv Mudenda concurred with Mrs Misihairabwi-Mushonga saying breastfeeding mothers would be allowed to bring their babies within the Parliament’s premises.

He added that in the future, Parliament would put facilities in place to cater for such needs.

According to parliamentary rules, anyone who is not an MP cannot get into the chamber when it’s in session as they are regarded as strangers.

Clerk of Parliament Mr Kennedy Chokuda explained to The Herald how the rules apply.

“The Standing Orders state that an MP cannot bring a person who is not an MP into the chamber. When we (Parliament staff) are in the House, there are certain sections where we can’t go except orderlies who will be delivering something to MPs.

“There is also a special dispensation allowing journalists to come into the House because we don’t have cameras where they can get from the feeds.

“It is because of the nature of our building but in other parliaments, journalists do not get into the chamber they get video from the feeds that will be installed on the walls,” said Mr Chokuda.

Meanwhile, some legislators came under heavy criticism from their colleagues and Adv Mudenda for absenting themselves from the House on Tuesday when deliberations on the proposed 2016 National Budget were still on.

They left despite the fact that automatic adjournment at 6.55pm had been suspended to expedite the Budget processes.

The quorum for the National Assembly is 70 MPs out of a composition of more than 210 backbenchers.

The House adjourned at 8:55pm on Tuesday due to lack of a quorum.

MDC-T Chief Whip Mr Innocent Gonese raised a point of order about the MPs who absented themselves.

“The chair (Speaker) does subscribe to the sentiments expressed and for the chair, it would appear the members who absented themselves do not understand the importance of a budget, more so when the minister of Finance was so committed to complete the task,” said Adv Mudenda.

“Not only that, we had prepared dinner for members to have their meal here and come back so that the question of quorum would not arise. That was not respected.”

US appoints new ambassador to Zim

Zimbabwe to adopt yuan as legal currency. Here’s why

Misihairabwi in yet another parly stunt