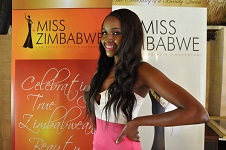 ZIMBABWE – Former Miss World Zimbabwe Tendai Hunda has been accorded with an opportunity to represent Zimbabwe at the 44th edition of the Miss Intercontinental pageant set for Germany on December 18.

The pageant which is going to be held in East Germany, Magdeburg will see more than 70 worldwide countries participating.

Speaking to H-Metro, the 25-year-old beauty queen who attained a Bachelor of Sciences Honours in Politics and Administration with the University of Zimbabwe, said she is elated with the golden opportunity.

“I am excited because this is my second biggest pageant after Miss World 2014 and I am prepared to take this opportunity and do my best for my country.

“My organisers were enticed by my previous experience from the Miss World pageant.”

Hunda said after the Miss World pageant last year, she dedicated her time to academics before her return to this stage this year.

“After Miss World I went back to school and graduated but I have now returned back to my modelling.

“I still want to carry on with my studies, so I will be applying for my Masters next year and hopefully I will get a place,” she said.

The 25- year-old beauty queen represented Zimbabwe last year at the Miss World beauty pageant which was held in London.

Boot camp starts on December 5 to the 18th of the same month when finals will be held, according to the pageant’s country manager Sandra Chawabvunza.

“We are still making efforts for the trip to succeed and everything is going on according to script.

“Preparations are at an advanced stage and I am happy she is going to do the best and bring the crown home.

“I will be working with her on all her projects.”

Sandra who is the director of Prestige Modelling Agency has set a remarkable level of grooming some of the prominent models in Zimbabwe.

According to Sandra, Hunda’s participation was necessitated by Miss Continental director Washington Ali with the assistance of Hilda Mulenga who is the director of Mumba Children’s project

“Yes they have been facilitating for years and this is another chance they have offered to one of our own models,” she said.

The first Miss Intercontinental pageant took place in 1971 after it was drawn from tourism competition, bringing more tourists to the island of Aruba.

The Miss Intercontinental pageant transformed into an international, annual tradition with numerous, beautiful and talented young women from around the world and helps in intercultural exchanges and perseveration of cultural values.

ZIMBABWE - Former Miss World Zimbabwe Tendai Hunda has been accorded with an opportunity to represent Zimbabwe at the 44th edition of the Miss Intercontinental pageant set for Germany on December 18. The pageant which is going to be held in East Germany, M...
Share via
x
More Information