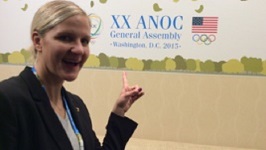 ZIMBABWE – For some, it will be time to visit relatives in the rural areas after a whole year in the cities while for others this is the time to donate to the underprivileged.

For another section of the sport community, it is business as usual.

Viola Musariri, who was the head of delegation for the Zimbabwean team to the Special Olympic World Games, says this is the time to celebrate what has been a memorable year.

On the other hand, the spokesperson of the Zimbabwe Football Association, Xolisani Gwesela, says he will be on his way to his rural home of Zhombe to join the rest of the family for a braai.

Even Zimbabwe Olympic Committee Chief Executive Officer Anna Mguni says after a hectic year, it is time to take a rest.

Mguni says she will be at her rural home in Chimanimani, Manicaland province, with the rest of the family for a Christmas reunion.

However, five-time Castle Soccer Star of the Year, George Shaya, says he will be relaxing at home with nothing serious to do.

But for World Boxing Council bronze belt title holder Charles Manyuchi this is his time to go into serious training.

Manyuchi is looking forward to a crack at the WBC silver belt title which British boxer Amir Khan holds.

Even the secretary general of the Zimbabwe Volleyball Association, Ringisayi Mapondera, says it will be sporting business as usual.

The volleyball supremo says they will be busy playing volleyball with his family and friends at his home in Harare.

These are the different ways in which people choose to spend their Christmas.