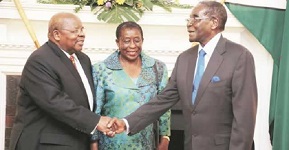 ZIMBABWE – New African leaders should be properly inducted into the history of Africa for them to carry forward the vision of the continent’s founding fathers, visiting former Tanzanian president Benjamin Mkapa said yesterday.

Mkapa said the new crop of leaders emerging on the continent should shun the dependency syndrome and never go to bed with their former colonisers.

He was speaking after meeting President Robert Mugabe at State House in Harare.

“I think first, there is need for the younger generation to be properly inducted into the history of Africa,” Mkapa said.

“They should know that there was an armed struggle here, people lost their lives and what motivated those people to be prepared to lay down their lives, what motivated the founding fathers of our nations and to see how they can carry that legacy of thought, of outlook, of independence as well as cooperation of action in dealing with the problems that confront us at the national, regional and continental level.”

Mkapa, who was accompanied by his wife Anna, said it was sad that some Africans were now behaving like Europeans or Americans in every aspect.

He said the legacy left by the founding fathers should be carried forward until the continent became independent in all spheres.

“The younger generation has got to deliberately go back, sit back, think because the challenge for them is to carry that legacy forward, not to establish a new dependency relationship with the colonial powers or imperialist powers,” Mkapa said.

“That’s a big challenge because I see more and more people now behaving like English men or Americans and it’s not only in the cultural sphere but even politically and economically.”

Mkapa said his courtesy call on President Mugabe, which lasted more than one and half hours, saw them talking about climate change which has affected most countries.

He said it was painful that the continent was paying the price of climate change although it was not the biggest polluter in the world.

“I took the opportunity first to express our sadness and sympathy with the drought situation in most parts of the country,” he said.

“I hope that we can traverse it properly and it will receive some international assistance. This is a product of climate change. Although we are not the principal causes of these adverse changes in our countries, we are paying the highest price for this. We’re very sorry and we hope we can soldier on.” Mkapa said they also updated each other on the situations in their respective countries.

“I think we can say it’s satisfactory politically and I also think from what I’ve read and heard, the (Zimbabwean) economy is beginning to pick up,” he said.

“It’s good news and I also thanked him for the courtesies he extended to me.”

Mkapa, who was Tanzania’s third president between 1995 and 2005, on Tuesday toured Gushungo Dairy Estate, the Amai Mugabe Junior School and the Children’s Home in Mazowe run by First Lady Cde Grace Mugabe to get an appreciation of the philanthropic projects being carried out there. Today he is expected to officiate at the Southern African Research and Documentation Centre (SARDC) renaming ceremony of a block to be named Julius Nyerere House. Nyerere was Tanzania’s first President when the country won its independence from Britain in 1961 and supported many liberation movements fighting for independence in southern Africa, including Zimbabwe’s.

Mkapa completes his week-long visit with a lecture at the Zimbabwe Defence College on Friday morning before touring Manicaland in the afternoon.

ZIMBABWE - New African leaders should be properly inducted into the history of Africa for them to carry forward the vision of the continent’s founding fathers, visiting former Tanzanian president Benjamin Mkapa said yesterday. Mkapa said the new crop of ...
Share via
x
More Information
x