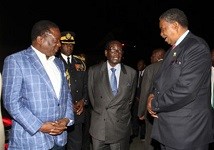 ZIMBABWE – Under fire Vice President Emmerson Mnangagwa is reported to have confronted President Robert Mugabe on Saturday protesting the verbal shellacking he had to endure from the First Lady Grace Mugabe during a rally in Chiweshe on Friday.

The newspaper reports that Mnangagwa met Mugabe on Saturday at his residence in the capital and complained about the claims made by the First Lady that he was plotting to unseat the 92-year-old Zanu PF leader.

“Yes, the VP met President Mugabe, who offered to deal with the VP’s concerns. Mnangagwa raised issues regarding the attacks on his person,” a well-placed Zanu PF source told the paper.

“The VP made the move to push the President to intervene and avoid an embarrassing ouster like what happened to former Vice-President Joice Mujuru,” the source added.

Mnangagwa’s supporters under the ‘Team Lacoste’ faction, meanwhile are said to have held an emergency meeting in Harare where others urged him to resign in protest.

“Members of Team Lacoste (Mnangagwa’s faction) had a crisis meeting in Harare on Friday night. They were shocked by the developments. Some were of the opinion that Mnangagwa should simply resign while others opposed it,” the sources told the paper.

“Right now, members are mobilising to stage massive demonstrations at the Zanu PF headquarters to implore Mugabe to rein in his wife. The President assured him (Mnangagwa) that he would address his concerns and there will likely be an extraordinary politburo meeting on that this Wednesday (tomorrow).”

ZIMBABWE - Under fire Vice President Emmerson Mnangagwa is reported to have confronted President Robert Mugabe on Saturday protesting the verbal shellacking he had to endure from the First Lady Grace Mugabe during a rally in Chiweshe on Friday. Vice Presid...
Share via
x
More Information